See any errors in the new issue?
Send the webmaster a note and we can make corrections. 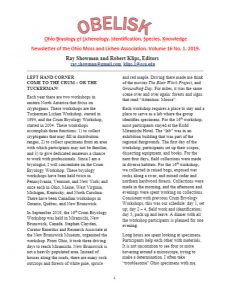 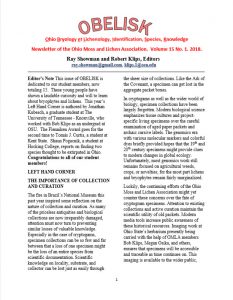 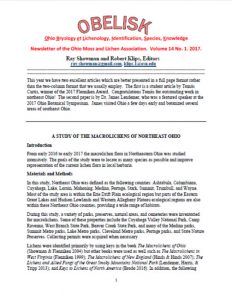 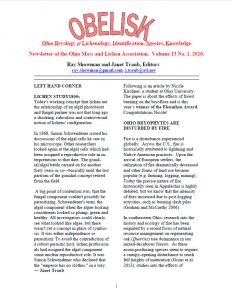 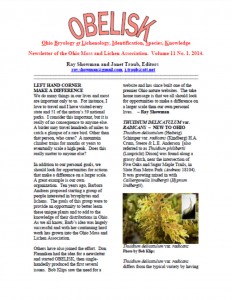 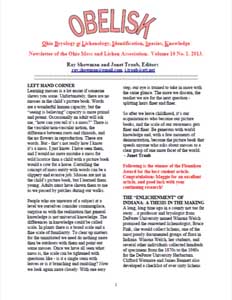 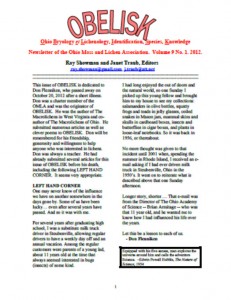 In remembrance of Don Flenniken, an award of $100 has been established for the best article submitted to OBELISK each year by a student member of the Ohio Moss and Lichen Association.  Articles should be about some aspect of bryology or lichenology with a text of at least one single-spaced page.  Accompanying photographs are encouraged, and priority will be given to original research.  Articles may be in the informal style (see recent issues of OBELISK) or in the more formal style of a journal paper.  Articles should be submitted by November 1 to allow judging before the OBELISK deadline.  Good luck students!

The Ohio Moss and Lichen Association (OMLA) newsletter is called the OBELISK, which stands for Ohio Bryology et Lichenology, Identification, Species, Knowledge. In addition, the obelisk, found in most cemeteries, provides a nice microhabitat for several species of lichens and mosses. William Starling Sullivant (1803-1873), considered by many to have been the Father of American Bryology, lies beneath the shadow of an obelisk in Greenlawn Cemetery in Columbus, Ohio.

The inscription reads:”William Starling Sullivant L.L.D.
A Classical Scholar and Member of Various Learned  Societies in Europe and America.“

OBELISK. Don Flenniken. 2005. P. 1.
The name of the newsletter for the Ohio Moss and Lichen Association is the OBELISK (an acronym for Ohio Bryophytes et Lichens: Information, Science, Knowledge). William Starling Sullivant, considered to be the Father of American bryology, lies beneath the shallow of an obelisk.The inscription reads “William Starling Sullivant L.L.D. A Classical Scholar and Member of Various Learned Societies in Europe and America.”

October 22-24. Adams County [Ohio]. Don Flenniken. 2005. P. 2.
The fall foray of the Ohio Moss and Lichen Association took place at the Edge of Appalachia Preserve System. The complete collection from this foray will be published in Evansia. Lucas County [Ohio] April 16, 2005.

Lefthand Corner. Don Flenniken. 2006. P. 2.
Changes in identification techniques are causing nomenclatural changes which make it hard to keep up with all the name changes.

OMLA Midwinter Meeting. Bob Klips. 2006. P. 2.
The OMLA winter meeting will be held on January 21, 2006 at the Ohio State University Marion Campus. The meeting will focus on identification techniques and identifying difficult specimens.

Crum/Tuckerman Workshop, Note. Don Flenniken. 2007. P. 2. The Crum and Tuckerman Workshops met [in July 2006] at Shawnee State Park for a 4-day workshop. The results will appear in an issue of Evansia.

Left Hand Corner. Don Flenniken. 2007. P. 1. Common names are local, in a particular country’s language, and are often made up to fit a region. Scientific names are in Latin and are universally accepted. Perhaps there is no need to learn two sets of names.

Moss and Lichen Workshop. Don Flenniken. 2007. P. 1-2. Students, professionals and community members came to the Museum of Biological Diversity at the Ohio State University to attend a lichen workshop, led by Ray Showman.

OMLA Website Up and Running! Anonymous. 2008. P. 1. Brian Gara and Bob Klips have the OMLA website running at www.ohiomosslichen.org.

Lefthand Corner. Don Flenniken. 2008. P. 1. Lichens are compared to a city that ages and the interior begins to deteriorate and the growth moves outward.

Don Flenniken. 2008. P. 3. Don Flenniken found Acrospora obpallens in Washington County, Ohio. It was on the deteriorating base of a sandstone. The specimen was confirmed by Kerry Knudsen, University of California – Riverside.

Lichen Moths. Don Flenniken. 2008. P. 7-8.
Members of the subfamily Lithosiinae in the family Arctiidae are commonly known as the lichen moths. In 2005, in Adams County, OH, Barbara A. Lund photographed 4 species. Don Flenniken had collected lichen moths in Washington, Jefferson and Wayne Counties.

Ephemeral Mosses. Bob Klips. 2008. P. 8-10.
Ephemeral mosses tend to appear on disturbed open areas. They are cushion mosses and tend to appear either during spring or fall. Photographs and descriptions of several Ohio ephemerals are presented.

Lefthand Corner. Don Flenniken. 2009. P. 1.
The inherent beauty of bryophytes and lichens make them as valuable as any other natural feature of the landscape.

Moss Musings- Making Useful Specimens. Barbara Andreas. 2009. P. 1-2.
Instructions are given on how to collect and make herbarium specimens. Information necessary for herbarium labels is provided.

2009 Summer Foray [Darke County]. Barbara Andreas and Ray Showman. 2009. P. 2, continued on 4-7.
On the 2009 foray, 26 species of macrolichens were reported. Sixteen were new to the county, and one, Physciella melanchra, is new to Ohio. Sixty four species of mosses where reported, with 57 being new county records. Five liverworts were found, all of which were county records. One moss, Brachythecium velutinum, is new to Ohio.

Hitchhiking Lichens. Ray Showman. 2009. P. 7.
Ramalina complanata is a rare Ohio lichen that was collected on the Darke County foray. Most of the recent records were from single thalli. It has also been collected on landscape plantings. Possibly this and other lichens move around by hitchhiking.

Corticolous Mosses. Bob Klips. 2009. P. 8-10.
Mat-forming pleurocarpous mosses tend to do well at the bases of trees. Other species, including acrocarps, are found higher on the tree. This article mentions just a few of the more common corticolous Ohio mosses.

Wanted (ALIVE) [Anzia colpodes]. Ray Showman. 2009. p. 10.
Anzia colpodes, the Black-foam lichen, is widely distributed in Eastern US but is rare in Ohio. It is known from Ohio counties, all collected before 1945.

2009 Fall Foray [Meigs County, OH]. Ray Showman and Barbara Andreas. 2009. P. 11-13.
Forty-five species of macrolichens were recorded from the foray, including five new county records. A good population of Myelochroa metarevoluta was found at Shade River State Forest. This lichen was known from only two other Ohio counties. Twenty two species of crustose lichens were reported. A total of 77 bryophyte species were collected, and half were county records.

Left Hand Corner – Lumpers and Splitters. Don Flenniken. 2010. P. 1-2.
Judgment of likeness is expressed in families and genera whereas differences are expressed in species. Some see small minute differences (the splitters) whereas others see no differences and stuff all the species together in a box (the lumpers).

New Lichen For Ohio [Usnea cornuta]. Ray Showman. P. 2.
Usnea cornuta, a new record for Ohio, was found on a branch dislodged from the tree canopy by foraging nuthatches. Its distribution is spotty, stretching from coastal Maine, the Smoky Mountains and to New Mexico.

Hummingbird Nest Lichens. Ray Showman and Jim McCormac. 2010. P. 2-3.
Hummingbirds and blue-grey gnatcatchers use lichens to camouflage their nests. Nests were examined in order to establish the type of lichens used by each species. With the exception of Myelochroa aurulenta, the two bird species used the same lichens.

A Fascinating Show [poem]. Ray Showman. 2010. P. 4.
A poem dedicated to the variety of lichens and the habitats which they occupy.

Henry County Summer Foray. Ray Showman and Jim Toppin. 2010. P. 5-7.
Sixty one moss species and 8 liverworts were collected, with 43 mosses being county records. Twenty five macrolichens and 13 crustose lichens were collected. Physciella melanchra was collected for the second time in Ohio. Ramalina americana is an uncommon fruticose lichen and probably hitch-hiked to the area on nursery stock.

Wanted (ALIVE) [Schistostega pennata]. Bob Klips. 2010. P. 7-9.
Schistostega pennata is an Ohio rarity, reported from only Geauga and Portage Counties. One literature citation refers to it growing on soil in caves. It will take a prepared eye to relocate this species.

Chemical Speciation? Bob Burrell. 2010. P. 9-10.
Lichenologists do not have the luxury or time to culture their specimens to see if the identifying characteristics hold true or whether they are merely expressions of the environments in which they are found. Would Cladonia grayi found growing in Scioto County still be identified the same if it were transported to, and allowed to grow elsewhere?

Cemetery Lichens. Ray Showman. 2010. P. 13.
Headstones and their bases are frequently encrusted with lichens. There is a group of lichens that consistently find this habitat. This community is found in cemeteries throughout the state. These lichens are also found on trees in the flat Huron-Erie-Lake Plains and Till Plains region but are rarer in the Appalachian Plateau region.

What Moss Is This? Part 2 – Tips for Making Microscope Slides for the Examination of mostly Acrocarpous Mosses. Diane Lucas. 2010. P. 14-18.
Directions for sharpening razor blades, and dyes for staining Sphagnum are given. Instructions on how to prepare cross sections for compound microscope slides and characteristics of various acrocarps are highlighted.

Left Hand Corner – The Value of Amateurs. Ray Showman. 2011. P. 1-2.
Much of the information about species comes from specimens and observations made by amateurs. Observations and results must be made available to the scientific community by providing complete information.

Found Alive! Beginner’s Luck. Brian Riley. 2011. P. 2-3.
Teloschites chrysophthalmus was found in Union County, Ohio. It was a presumed extirpated from the state, last collected in Erie County in 1910. It was found while examining an ash tree for the emerald ash borer.

Ohio Moss and Lichen Associations. Bob Klips. 2011. P. 3-6.
Bryophytes and lichens share similar substrate requirements and occupy the same microhabitats. They are poikilohydric and are capable of drying out for a prolonged period. Specific lichens and mosses frequently occur together.

Lichens May Inactivate Prions. Bob Burrell. 2011. P. 6-7.
Research has indicted that lichens may have potential for reducing prions because of naturally-produced protease enzymes. Lichens produce unique organic compounds that have antimicrobial activities.

Revision of the Lichen Genus Punctelia. Don Flenniken. 2011. P. 7-8.
The name applied to the North American lichen species Punctelia subredecta should be rejected in favor of Punctelia caseana, the common eastern species, but Punctelia perreticulata is a valid species and is found in southern Ohio. A modified key to 5 species of Punctelia is presented.

What Color Is That Rock Tripe? Bob Burrell. 2011. P. 8-9.
Rock tripe (Umbilicaria mammulata) is usually gray-brown to olive-brown in color. However, there are definitely some populations that are green. Epiphytic green algae on the upper surface may be responsible for this color phase.

Ohio Bryology and the Moss Atlas: History and Progress. Barbara Andreas. 2011. P. 9-12.
The histories of the “Catalog and Atlas of the Mosses of Ohio”, OMLA, the OBELISK, and modern Ohio bryophyte herbaria are discussed.

The Crustose Lichens of Jefferson County [poem]. Don Flenniken. 2011. P. 13.
A poem about lichens collected some 45 years ago is presented, along with a list of crustose lichens from Jefferson County, Ohio.

Wanted (ALIVE). Ohio Liverworts. Barbara Andreas. 2011. P. 18-19.
The last checklist for Ohio liverworts was published in 1964. That checklist lists 122 species of liverworts. The distribution maps and nomenclature are outdated. Ohio liverworts should be collected and deposited in herbaria.

The Dust Lichens. Don Flenniken. 2011. P. 19-22.
The group of lichens currently known as the “dust lichens” has been largely ignored because they do not produce apothecia or fungal spores. They are placed in the group called Fungi imperfecti. At the present time, there are approximately 9 species known from Ohio. These taxa are illustrated and discussed.

OMLA Fall Foray – 2011 [Crawford and Morrow Counties, Ohio]. Jeff Rose and Bob Klips. 2011. P. 25-27.
A total of 20 species of lichens, 18 of which are county records, are reported from Crawford County; and 26 species, including 11 county records, were reported from Morrow County. A list of mosses, liverworts and hornworts is presented. Two state-listed mosses, Plagiothecium latebricola and Campylostelium saxicola, were collected from Crawford County.

Collecting Lichens in West Virginia. Don Flenniken. 2011. P. 28.
Flenniken describes a church service he attended while collecting lichens. Field trips are not all about specimens.

PHOTOS OF Forays and Groups