Bryophytes are small plants that lack true vascular tissues. They are the mosses, liverworts and hornworts. While many bryophytes are restricted to moist places, some species of mosses are capable of withstanding long periods in a dried-up condition, to become perky and vibrant during the intermittent intervals when they are wet (a physiologic adaptability termed being “poikilohydric”). You can find bryophytes most often in environments that are too hostile for higher plants, such as sidewalk cracks, the bark of trees, shady logs in woods, the bare faces of boulders, dark crevices in cliffs, and on the newly exposed soil of plowed fields or the bases of overturned trees. Some are even aquatic, attached to rocks in fast-moving streams.

Hornworts (Division Anthoceratophyta) are uncommon and there are just a few species in OH, but one of them grows in open disturbed places where it can be abundant. The one shown smiled for the camera  along a newly cleared pipeline right-of-way during an early autumn afternoon in Hocking County.  A hornwort is dorsiventrally flattened, sprawling and irregularly shaped, suggestive of some liverworts. The spore-producing stages are indeed horn-like, and split lengthwise starting from the top to release spores as they mature. 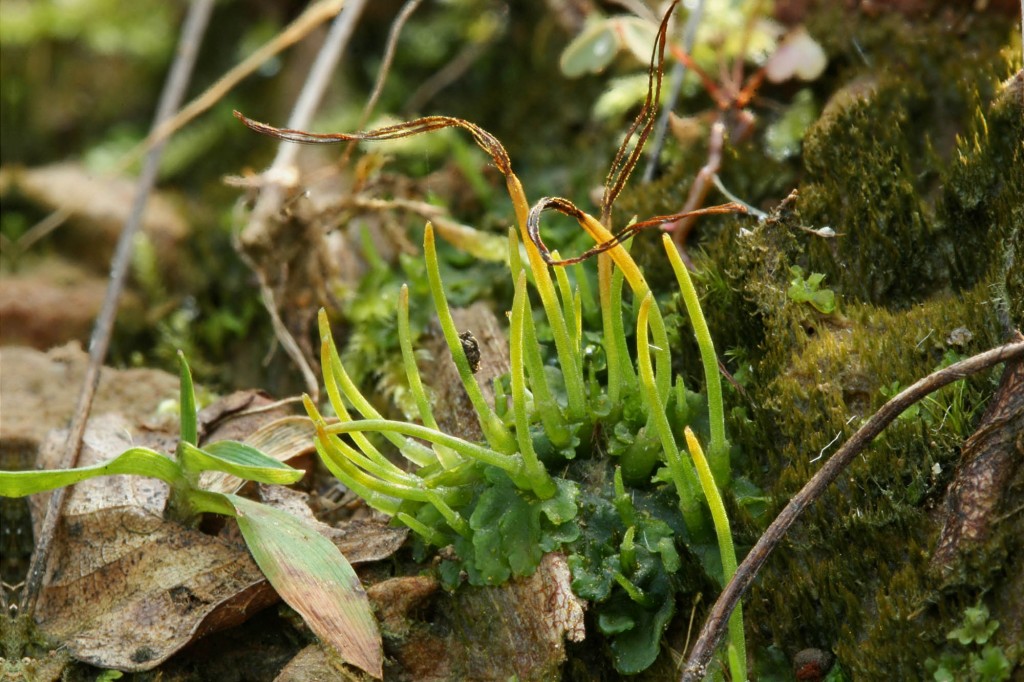 Hornworts, such as this Phaeoceros laevis, typically grow in disturbed open places.

Liverworts (Division Marchantiophyta) are fairly common, with a little over 100 species recorded so far from Ohio, but they are rarely abundant or large enough to be noticed easily. A notable exception is Bazzania trilobata, which occurs in large patches on the ground in hemlock dominated forests. 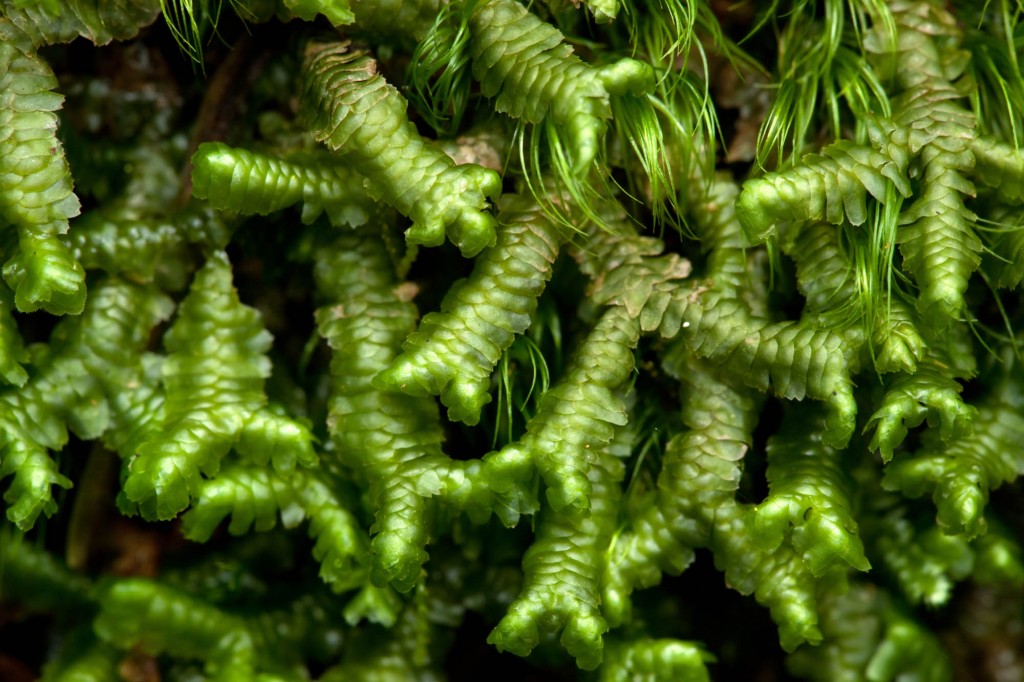 Liverworts are quite variable. The most well known types from biology class are the tongue-shaped flattened thallose liverworts, such as Marchantia polymorpha. The specimen of Marchantia shown below was found growing as a weed in flower pots at a plant nursery. 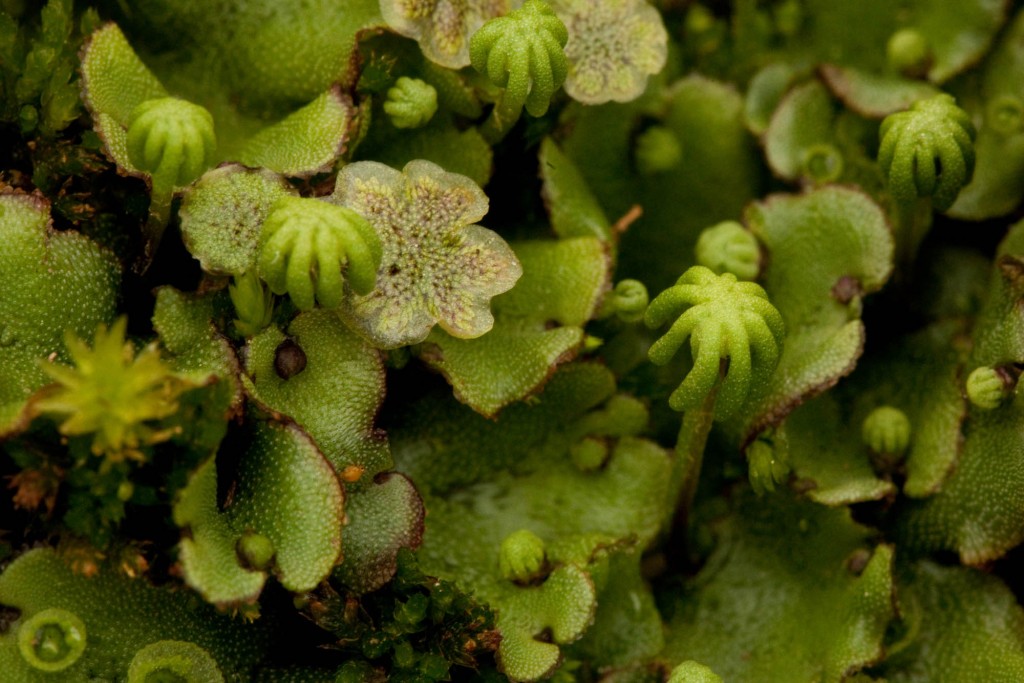 Thallose liverworts are actually much less common than the more moss-like leafy liverworts. These liverworts often occur sparsely mixed in with mosses. Compared to mosses, leafy liverworts tend more often to be flatter with their main leaves in two ranks or rows and reduced underleaves. Also, the leaves are sometimes much more elaborate than moss leaves, being variously lobed or dissected. The leafy liverwort spore-producing stage is very delicate and short-lived. 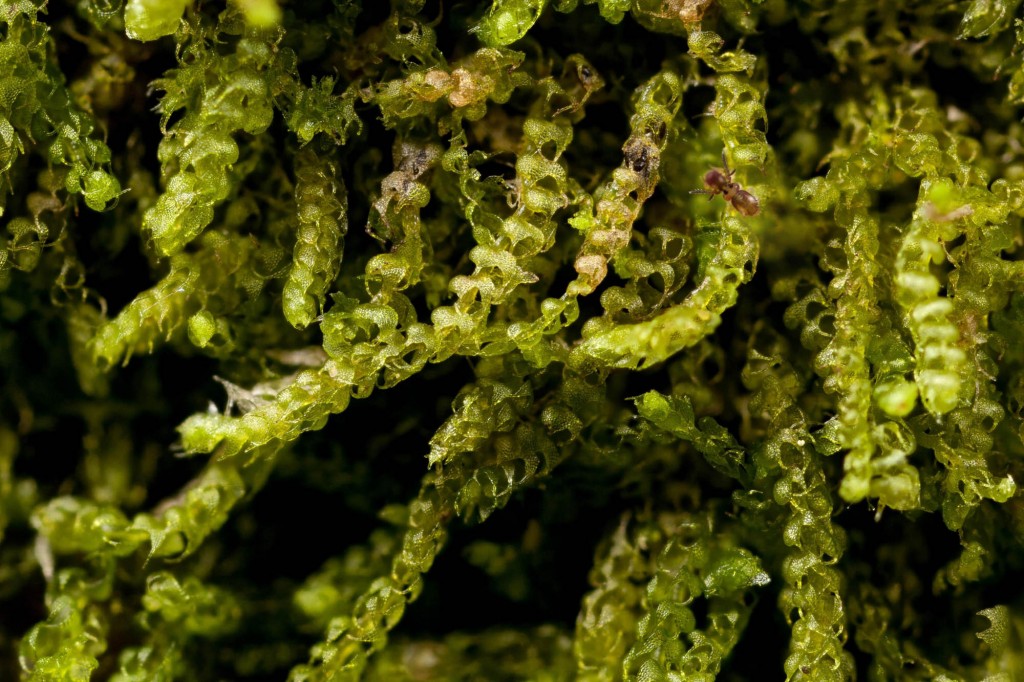 Nowellia curvifolia is a leafy liverwort common on decorticated logs. The leaves look like billowed sails.

Mosses (Division Bryophyta) are the most abundant, speciose, and conspicuous bryophytes. Most often, their leaves are in whorls about the stem (although many are somewhat flattened). The leaves are never (in our species) lobed or divided, and the spore-producing stage, when present, tends to persist on the plants and is useful in identification. There are two general growth forms of mosses: (1) cushion mosses, technically called “acrocarps” are having stems that are single, separate, and; (2) carpet mosses, technically called “pleurocarps,” that are more branched and sprawling (pleurocarps). 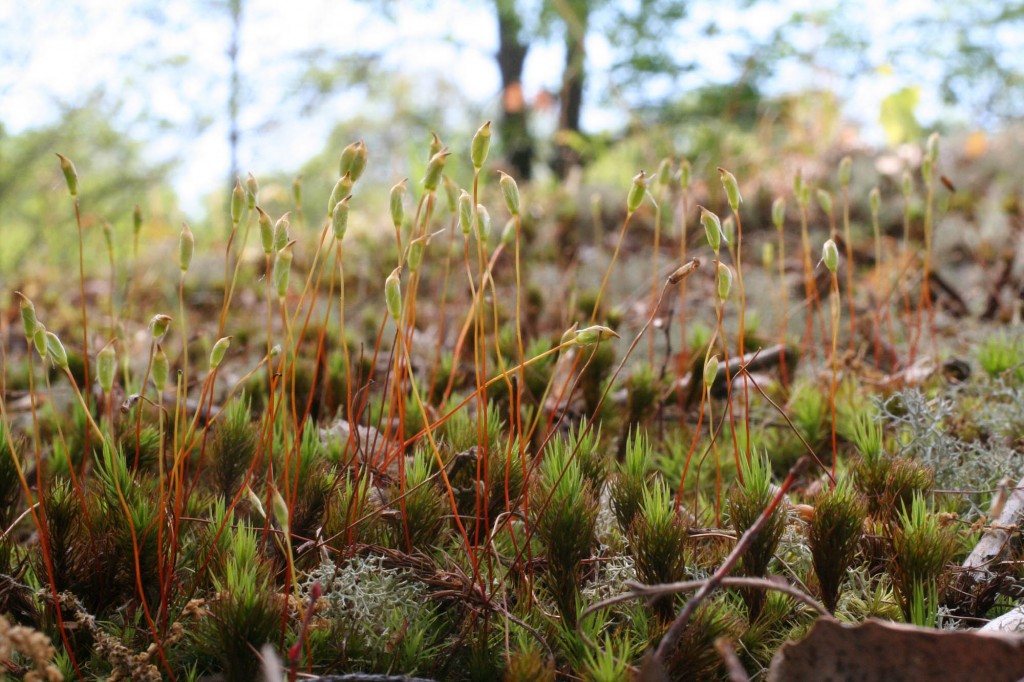 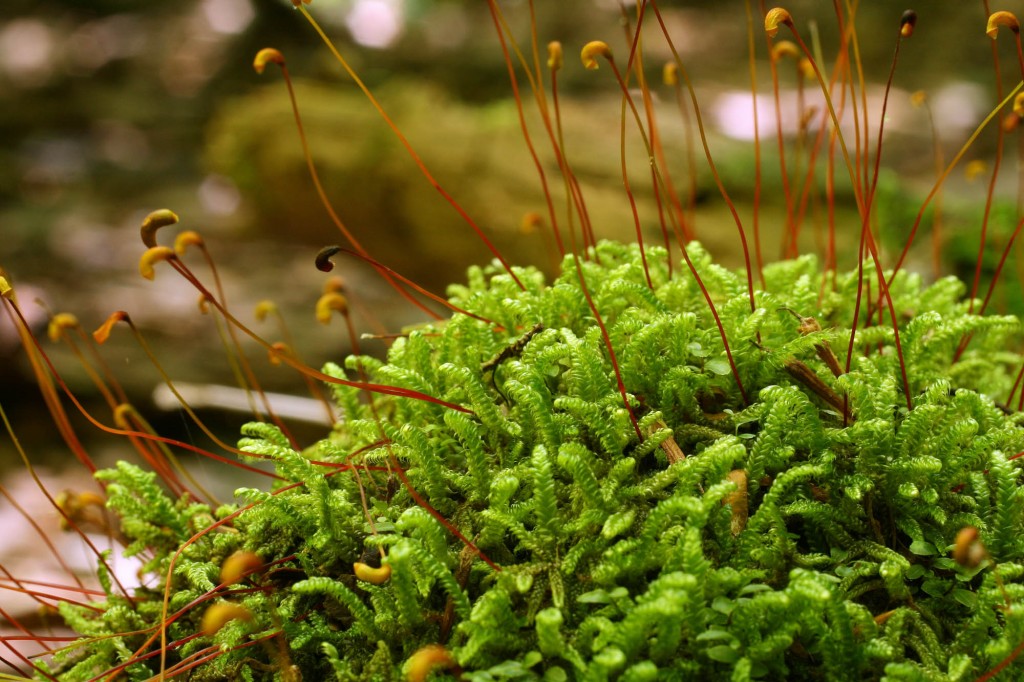 Hypnum curvifolium is a moss with a pleurocarpous growth form.

Bryophytes are non-vascular plants
with a dominant gametophyte

To understand bryophytes, it helps to understand the generalized plant life cycle. Some terms:

The plant life cycle includes the alternation of generations between two different multicellular organisms, either of which might rightly be called a “plant.” These two “generations” are the SPOROPHYTE and the GAMETOPHYTE.

Over evolutionary time, there’s been a trend for plants to develop sporophytes that are larger and more important ecologically that their gametophytes. For plants other than bryophytes, when you see a plant, you’re seeing the sporophyte. Examples: a fern is a sporophyte; so is a pine tree or a daisy. Most plant gametophytes are very small, and in the case of seeds plants. may be wholly enclosed by the sporophyte. But for the primitive bryophytes, it’s the other way around. The green, leafy organism that you’d quickly identify as a moss is the gametophyte. The bryophyte sporophyte is smaller (or at least thunner), and simple, looking like a mere appendage of the gametophyte, to which it is permanently attached. The bryophyte sporophyte lives essentially as a parasite upon the maternal gametophyte that produced it. The picture below is of a common log moss, Pylaisiadelpha tenuirostris, showing both stages of the life cycle. 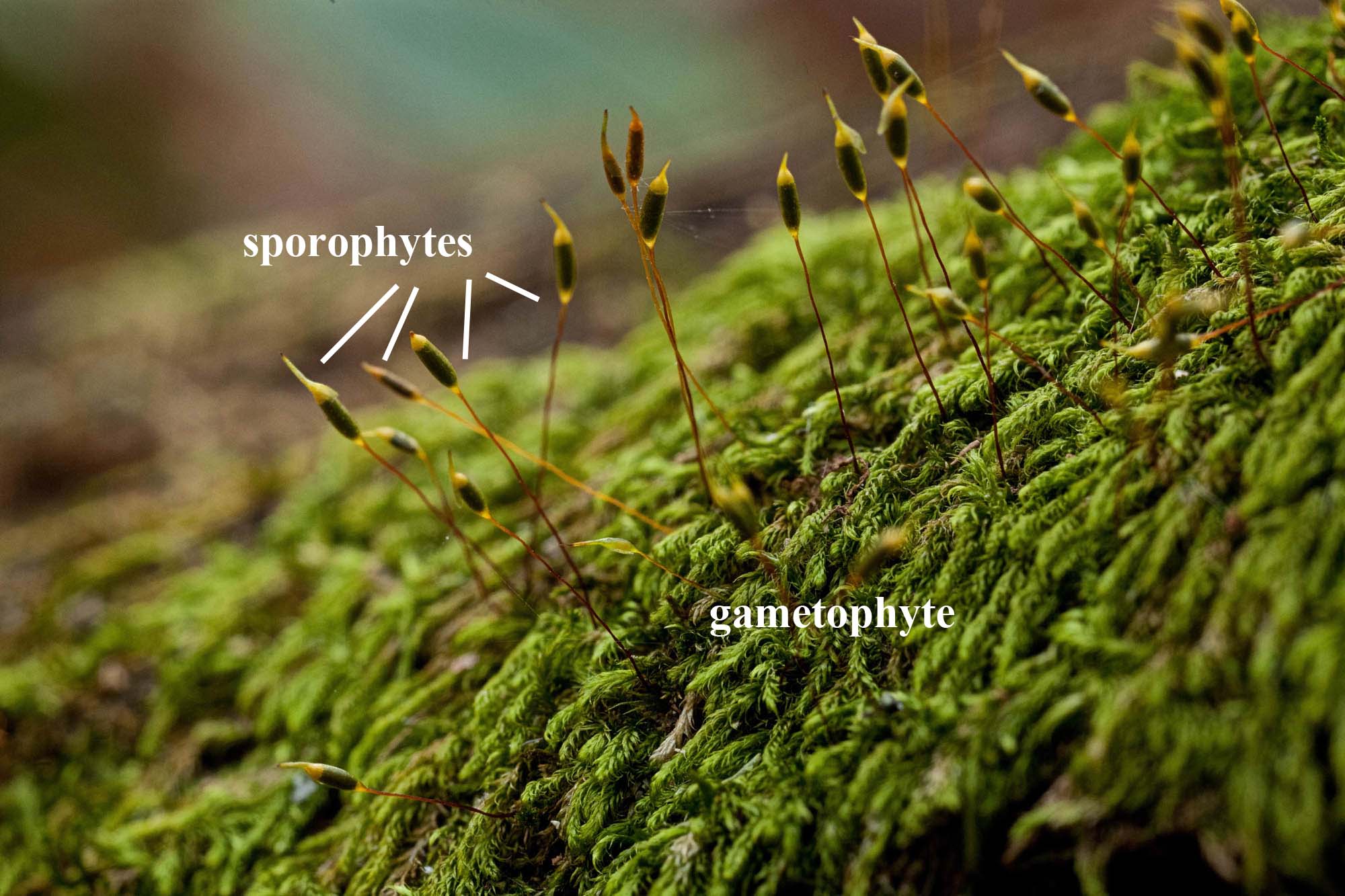