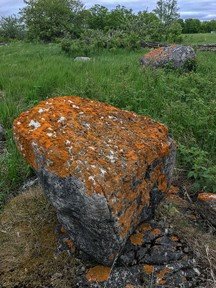 One of my goals during a recent visit to the Bruce Peninsula in Ontario was to locate and photograph Elegant Sunburst Lichen, Xanthoria elegans, one of North America’s most spectacular lichens. There are a couple of old Ohio records of this lichen from the Lake Erie Islands in northwest Ohio and some very recent sightings elsewhere along the coast, but I failed to find it along the rocky north shore of Kelley’s Island during a visit in July, 2017. Elegant Sunburst Lichen is fairly common along the rugged coastlines of the Great Lakes farther north, and I saw numerous examples during a boat cruise from Tobermory, at the tip of the Bruce Peninsula, to Fathom Five National Marine Park, where Lake Huron meets Georgian Bay.
Although I saw extensive displays of Elegant Sunburst Lichen along remote stretches of cliffs on several of the 19 islands in Fathom Five National Marine Park, it was mostly absent from the rocks in areas visited by tourists, such as the Flowerpots on the coast of Flowerpot Island. Popular places like Flowerpot Island and the Grotto in Bruce Peninsula National Park are visited by several hundred thousand people each year, mostly during the summer, and the collective impact of thousands of pairs of feet on the rocks where the lichens grow eventually destroys the lichens. Surprisingly, I found the best places to study and photograph Elegant Sunburst Lichen were inland, on large boulders in pastures grazed by beef and dairy cattle.
Elegant Sunburst Lichen thrives on rock that receives a generous supply of nitrogen from bird droppings and other sources. On cattle farms, the fields are regularly fertilized by manure produced by the cattle and spread using a manure spreader, which sprays the manure as the spreader is hauled by a tractor or – in Ohio’s Amish country – by a team of Belgian Shire horses or mules. The manure is semi-liquid when it is spread, and it’s a safe bet that some of the large boulders in the pastures of Bruce County cattle farms receive a healthy coating of nitrogen-rich liquid manure in early spring, much to the delight of the resident Elegant Sunburst Lichens.

A close-up view of a rosette of Elegant Sunburst Lichen shows it to be a thing of beauty, and elegant indeed. Thin, deep orange lobes of the thallus, which is white underneath, radiate out in a zigzag pattern. The many small, circular orange structures are spore-bearing apothecia, which are the primary means of reproduction in this species of foliose lichen. Elegant Sunburst Lichen has been used in lichenometry to estimate the age of rocks. After an initial two or three decades during which the lichen becomes established on the rock surface, the thallus of Elegant Sunburst Lichen grows at a rate of only 0.5 mm per year, so the lichens shown in the attached photographs may be hundreds of years old. 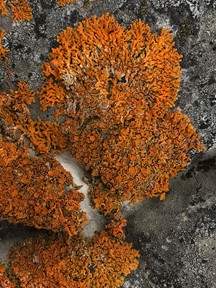 In the Arctic, Inuit hunters have used the presence of Elegant Sunburst Lichen to help locate the burrows of hoary marmots. Sadly, this vivid lichen has also been used by poachers to pinpoint the nests of Peregrine Falcons on cliff faces.

Elegant Sunburst Lichen has been found on every continent except Australia, and grows at altitudes up to 24,000 feet in the Himalayan Mountains, where the climatic extremes inhibit the growth of virtually all other forms of life. Elegant Sunburst Lichen has also survived an 18-month exposure to solar UV radiation, cosmic rays, vacuum and varying temperatures, similar to conditions on the surface of Mars, in an experiment performed by the European Space Agency on the outside of the International Space Station in 2013 to 2014.

Jesus may not have had lichens in mind when he stated, in the Sermon on the Mount (Matthew 5:5), “Blessed are the meek: for they shall inherit the earth.” But in a post-apocalyptic world, as the remnants of the human race struggle to survive, I have a strong feeling that Xanthoria elegans and other tough lichens would be doing just fine.