Getting started with SPHAGNUM

For a state that’s neither far north nor very boggy, Ohio is surprisingly rich in Sphagnum peat mosses, with 25 species on the OMLA moss atlas.  Thus, a working knowledge of them is an essential part of a bryologist’s toolkit.

This genus has a well-deserved reputation for being a challenge to identify, so when I saw that Eagle Hill Institute in Maine was offering a week-long summer seminar in 2018, I just had to go. It was taught by Duke University’s Jon Shaw with able assistance from graduate student Karn Imwattana. We visited bogs and fens and had a great time. 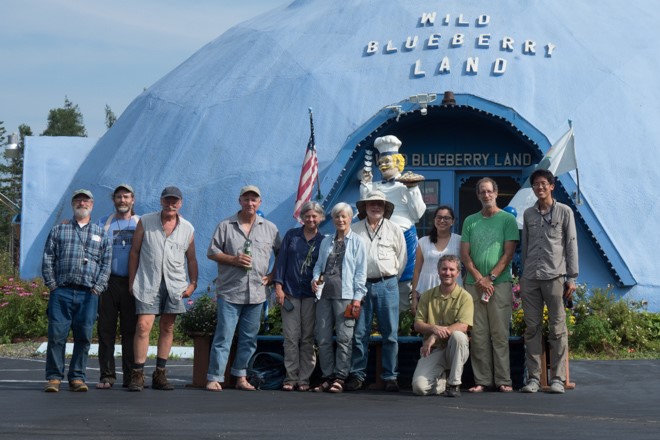 All aspects of the Eagle Hill experience were great, but there’s one thing that, all by itself, made the expense and long drive worth it: learning how to make moss leaf cross-sections!

Note: Cross-sectioning leaves isn’t just a Sphagnum thing. Thin slices are essential for telling apart the various Atrichum species that have been annoyingly segregated from the formerly sensibly interpreted Atrichum undulatum for distinguishing genera within the Pottiaceae based on their characteristic numbers (either one or two) of “stereid bands” and for trying to tell apart (the operative word here is ”trying”) the two Ohio species of pincushion moss (genus Leucobryum). I’ve heard bryologists, including some of the best experts in the world, cheerfully claim that all they need do is haphazardly chop and cut the wee little leaves laying on a microscope side, and after a sufficiently great number of cuts, searching through the leafy debris will turn up one or two usable useful cross sections. Humbug! That doesn’t work. All you get is a moss version of chopped spinach. Moss salad. Mossbbouleh. Mossfetti.

In the identification of Sphagnum, the microscopic examination of thin cross-sections of leaf tissue is necessary to discern the shapes of the green cells and their precise orientation with respect to the much larger empty hyaline ones. 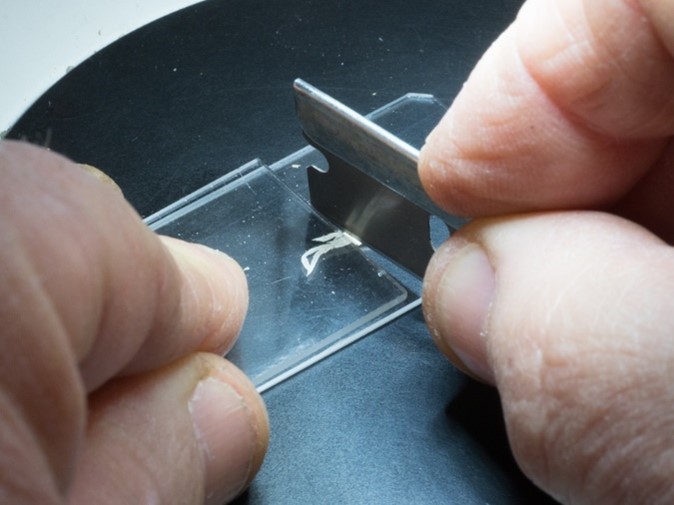 Procedure: Place a few damp but not wet branches on a microscope slide with their bases pointed towards where the cutting will take place. Lay another slide on top, leaving a fraction of a millimeter uncovered and thus cuttable. Press down gently on that top slide to stabilize the branch and allow the vertical wall of the top slide to form a neat cutting guide. Placing the blade against the slide-wall guide, angle it such that the cutting edge is positioned several slices-to-be away from the top slide. Make 4 slices, reducing the angle after each cut until the final cut is made flush with the bottom edge of the top slide. Finally, press firmly down on the top slide to compress the branches further, squeezing a precious additional few micrometers of leaf and make one more slice identical to the last. Repeat the entire process a few times after moving the top slide back a bit to expose another tiny length of branch-bundles. If all goes well, there will be a pile of beautiful thin crescents of moss leaf stuck onto the razor blade like drifted snow after plows come through. Remove the top slide, tweeze away any large stem fragments, and disperse the slices into a drop of water. Cap it off with a cover slip and admire your craftsmanship!

The architecture of a Sphagnum plant

Sphagnum gametophyte plants consist of upright stems bearing clusters of leafy branches along most of their length, topped by a pompom-like capitulum made up of a much denser aggregation of the clusters of branches.  Sphagnum produces sporophytes that are structurally simpler than those of typical mosses, composed only of a globose sporangium lacking a peristome, elevated a short distance above the leafy gametophyte not by a sporophytic setae, but instead by a  “pseudopodium” composed solely of gametophyte tissue. 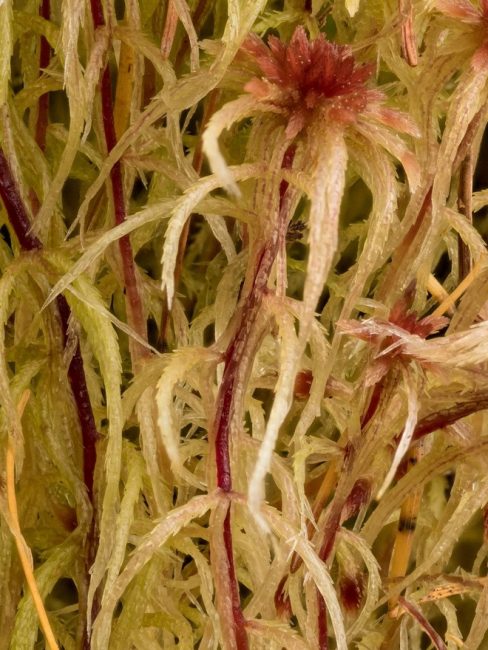 The sporophytes of different Sphagnum mosses are basically identical, and so are of no use in identification. 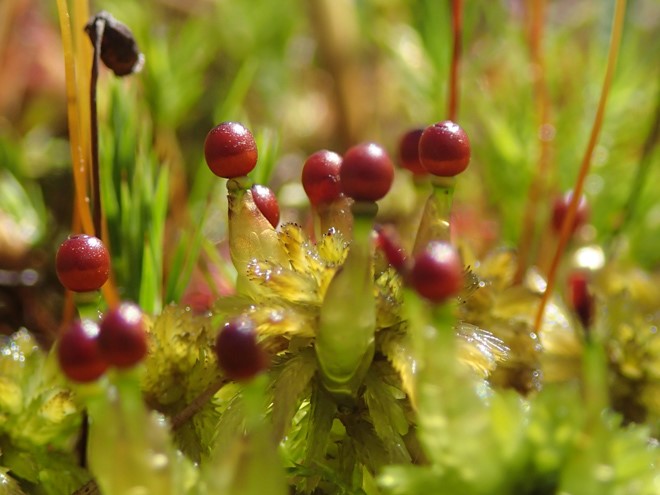 Both the stems and the branches of Sphagnum are leafy, but in different ways. The branches are densely populated with overlapping leaves that are ovate-lanceolate, acute and concave. The stem leaves, however, are sparse, parallel-sided, more abruptly tapered to the tip and generally lay flat against the stem. The photo below shows both types of leaves of Sphagnum fallax, stained with Gentian Violet. (Staining helps to see pores in cells, necessary for distinguishing some species.) 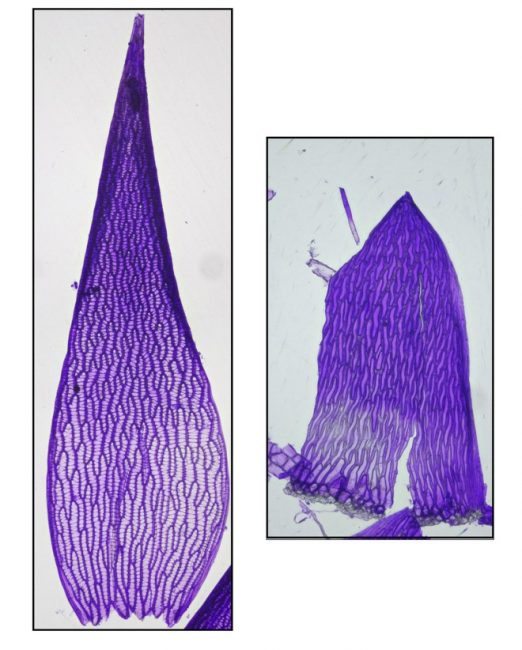 Perhaps the most striking aspect of a Sphagnum moss is its amazing dimorphic leaf cells. In typical moss fashion the leaves are one cell thick, but Sphagnum leaves are uniquely constituted, with narrow green photosynthesizing cells arranged into a mesh-like network surrounding large dead empty cells having holes in their walls to admit water. That configuration helps explain why Sphagnum mats are so bulky, achieving spatial dominance in nutrient-poor habitats where resources to construct biomass are so limited. Most of a peat moss’s body is basically tiny water balloons, providing structural heft with very little costly-to-produce biomass. 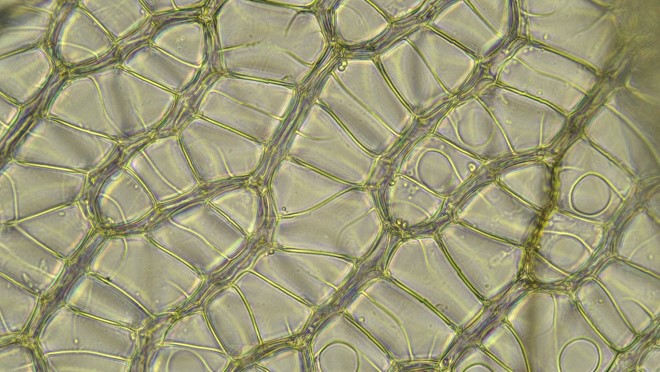 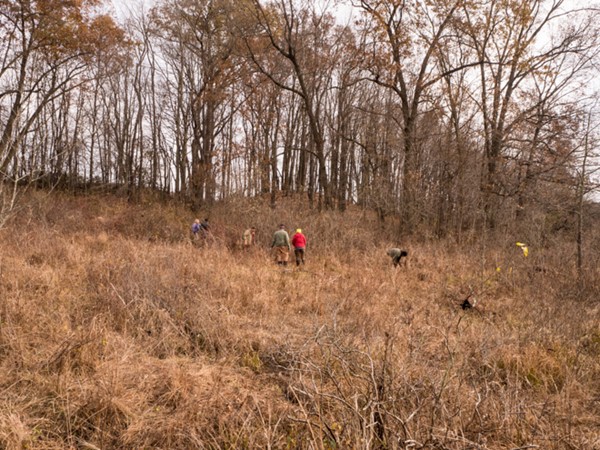 During a few breaks from cutting glossy buckthorn (boo, hiss!) and a few other shrubs that threatened to shade out the fen plants, I poked around looking for as many seemingly different peat mosses as I could find, to try out my newly-acquired ID skills. Here are the ones I found and why I think they are what I think they are. My go-to book for identification is Bruce Allen’s Mosses of Maine Sphagnaceae-Timmiaceae, containing an excellent illustrated treatment by Lewis E. Anderson.

This moss was especially pretty, looking rather stringy, with capitula red enough for even a somewhat color-blind botanist to notice. (It is also pictured above as the example of Sphagnum moss architecture.) 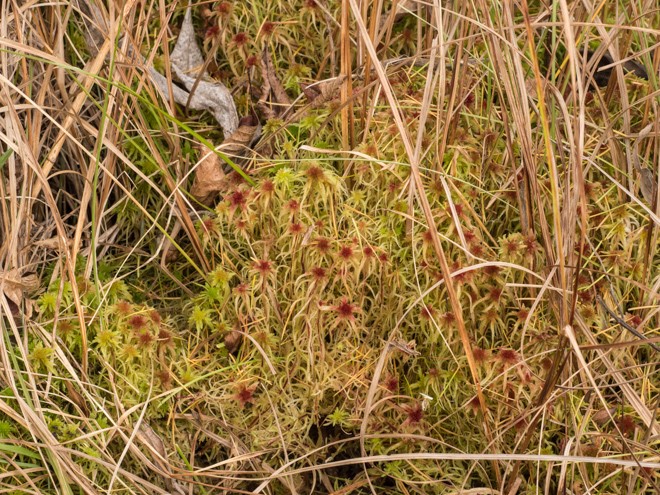 Back in the lab, it became evident that this is a member of the section Acutifolia, a somewhat difficult group (some species are rather similar to one another) that is well represented in Ohio. (Eight of the 25 Ohio Sphagnum species are in this section, comprising the most well-represented of our 6 traditionally recognized sections). Acutifolia is distinguished in part by its branch leaves wherein, as seen in the cross-section below, the small green cells are triangular and exposed more broadly on the inner (convex) surface of the leaf.

The Acutifolia portion of the key directs our attention to the shape of the stem leaves and the porosity (or lack thereof) of the stem cortical cells. To discern these features, I finally splurged and bought the long sought-after $38 Dumont Swiss #3 gourmet forceps. 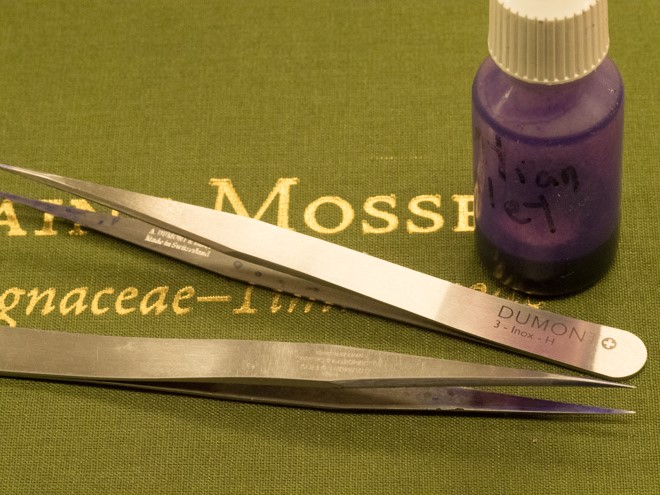 The fine tips helped me pluck the branches off a couple centimeters of the mid-portion of the stem, which was then dipped in the Gentian Violet. After rinsing the stem in water, using a razor I scraped the now-purple leaves onto a drop of water on a slide. 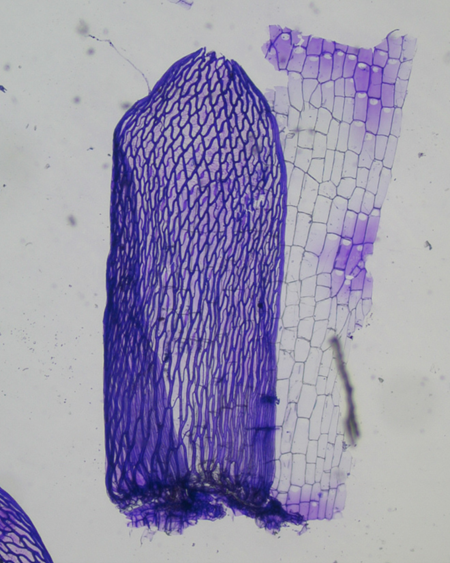 The stem scraping was done aggressively so as to shave off a portion of the cortex (outer cell layer). Notice in the image below that the stem leaves are more or less straight-sided and somewhat erose at the apex and the stem cortical cells are porose. (Note: according to Anderson, this species often has “a pinkish tinge.” These seem to me to be considerably more bright red than just “pinkish,” so maybe I made wrong turn somewhere, but the porosity of the stem cortex cells seems definitive.)

For two of our members of section Acutifolia –Sphagnum girgensohnii and S. fimbriatum –a key feature is having stem leaves that are broadly lacerate-fringed across the top, with a conspicuous triangle of enlarged thick-walled cells at the center of their bases. The difference between them is the degree to which the leaves are fringed.

This one, because the stem leaves (inset) are fringed only across the moderately expanded apex, I’m thinking is S. girgensohnii. A few people at the workshop in Maine mentioned a nifty field test for girgensohnii. Apparently, its stem is stiff, snapping neatly when bent like a piece of chalk. 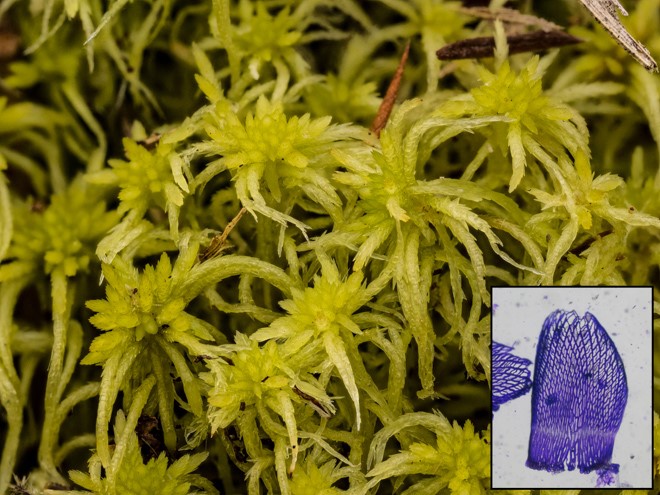 Another specimen has stem leaves that look like they’ve seen a ghost, so they must belong to S. fibriatum. 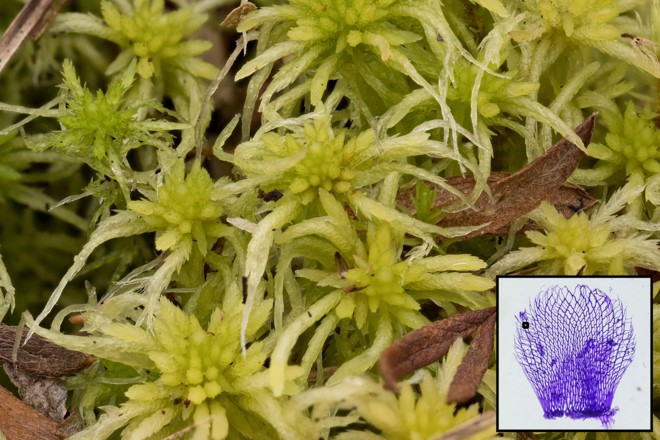 The Gentian Violet staining procedure really shines when trying to differentiate an unusual fen species of Sphagnum that’s not very common in Ohio (known from only three counties), S. warnstorfii. By virtue of its stem leaves being more or less straight-sided, combined with a stem cortex that’s aporose (lacking pores), it appeared that this member of the Acutifolia is either that fen-tastic species or S. fuscum or S. rubellum, which also have flat stem leaves. We’re told to look at the apical branch-leaf hyaline cells, to see if they have tiny strongly ringed pores on the outer (concave) surface.

Words like “tiny” and “ringed” aren’t helpful if you don’t have a clear idea of what “not tiny” and “not ringed” might look like. Thankfully, another unexpected benefit of the workshop came on the last day, when Jon and Karn asked whether anybody would like to take home the demo specimens we accumulated during the week. “Ooh ooh, me me!” Look at the lovely mossgasboard! 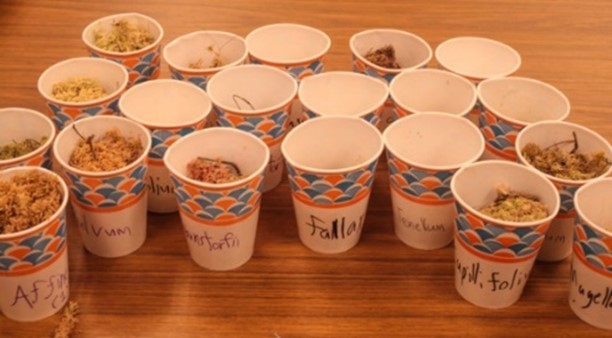 A comparison of my putative S. warnstorfii with the real thing seems favorable. The pores are about equally small and ringed in both samples. (Note: seeing features on the outer surface of a leaf requires a leaf to lay with the outer surface face up when the coverslip is placed in the slide. You’d think that with, say, a dozen leaves on a slide that a good number of them would by chance be oriented that way. Think again. They apparently float like little boats, curved side down. It’s annoying.) 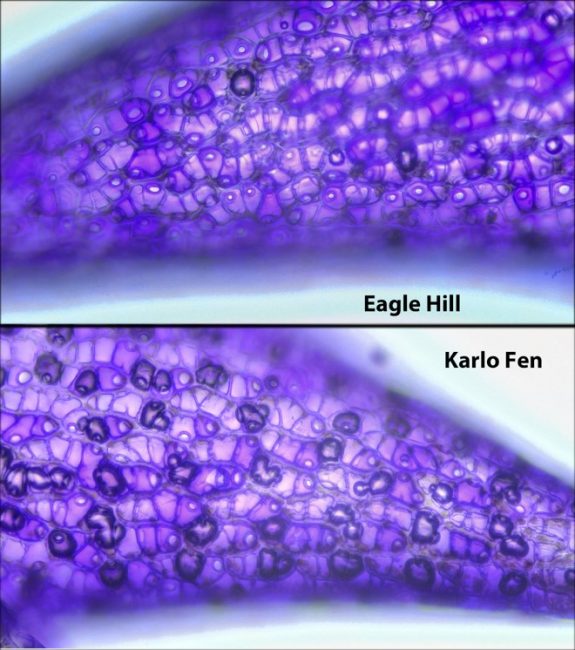 The 2nd most well-represented Sphagnum section in Ohio, with 6 species, is Cuspidata. Here, the branch-leaf green cells in cross-section are more broadly exposed on the outer surface. One of the major diagnostic traits in this section has to do with the young buds of the downward-pointing (pendant) branches in the lower part of the capitulum, i.e., are they single (one atop another) or paired (side-by-side)? This moderate-sized species with paired buds neatly fits the description for S. fallax, although it should be noted that “fallax” means “fooler,” so maybe this is something else. A sequoia tree perhaps? Blue whale? 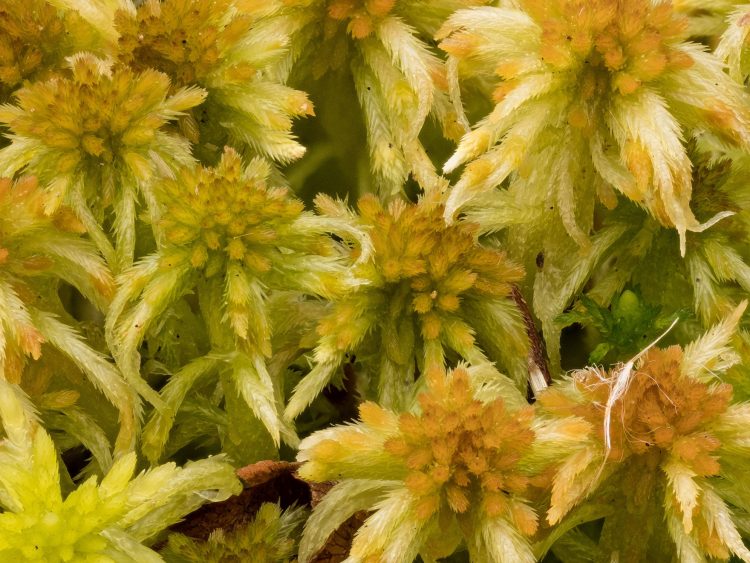 One of the weirder steps in the Sphagnum keys is when they talk about a “resorption furrow.” This is a phenomenon in leaf development, found in certain groups only and therefore useful to identify them, wherein the cell walls along the margins of branch leaves are partly digested away after they form, leaving a “C” shaped outline when viewed in cross-section. Below, see a cross-section of a member of the section Sphagnum, the more well represented (with 4 species) of the two sections that include species in Ohio that have a resorption furrow (the other being section Rigida, with Sphagnum compactum as our sole representative). 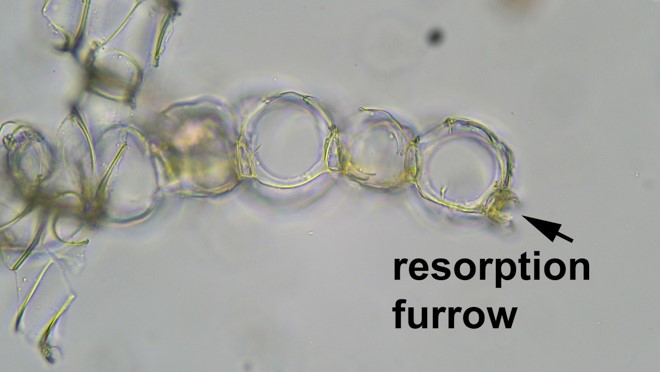 If the prospect of doing painstaking leaf sectioning just to see a miniscule feature like a resorption furrow seems daunting, don’t despair, because members of the section Sphagnum are distinctive macroscopically as well. Their stem leaves are deeply concave with a cucullate (hooded like a sweatshirt) leaf tip. Overall, they look puffy! Pleasantly plump Sphagnum palustre is our most common peat moss, known from 34 counties. 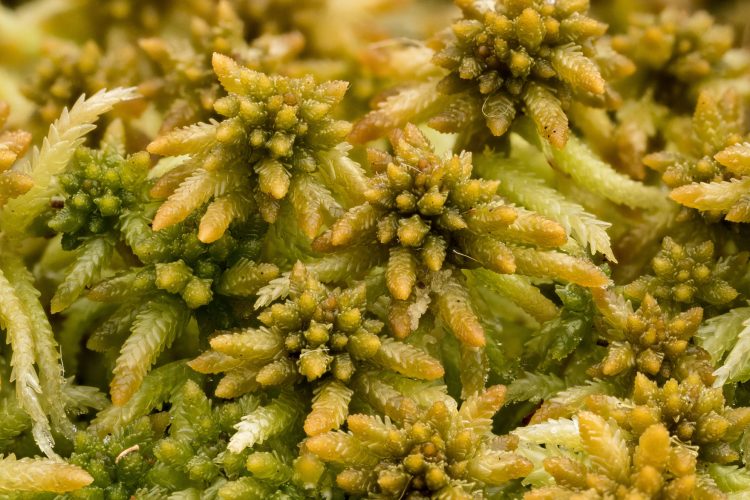 As is frequently the case in bryology, many of the features are best understood through experience rather than just seeing descriptions in book. Therefore, these identifications might not all be correct.

Attending a great summer workshop at a terrific institution was helpful but by no means necessary to gain the ability to dissect a peat moss and see its diagnostic parts. I encourage all moss-loving OMLA members (bryophiles?) to give Sphagnum hunting a try.