During the last Sunday afternoon in October, 2011, Bill Schumacher organized an impromptu field trip to Battelle Darby Metro Park in Franklin County attended by several OMLA members. The theme of the trip was a search for ephemeral mosses at a newly-established wetland/prairie ecological mitigation project. Mosses are strikingly abundant here, forming a crust over much of the ground, upon which little spheres of a presumably nitrogen-fixing cyanobacterium are also abundant. The principal ephemerals and ruderals at the site are Barbula unguiculata, Aphanorrhegma serratum, Physcomitrium pyriforme (tentatively identified using gametophytes only), and several Bryum species. Dark patches of protenema from which arise tiny sessile Ephemerum plants were common across the landscape. Subsequent examination of the miniscule mosses revealed costate, notably broad leaves, and other features consistent with Ephemerum cohaerans (Ephemeraceae), which had heretofore been reported from only two other Ohio counties (one of them a specimen record). Ephemerum species are probably under-represented in the Atlas because crawling around in wet fields during the colder months of the year isn’t everybody’s idea of fun. (Go figure!).

Continuing with the October Sunday ephemeral trip, the bryological high point of this very fruitful day (and perhaps for the year) was a little moss that first caught Jeff Rose’s eye: a tufted acrocarp with broad leaves and nearly globose capsules well-elevated by their setae. This moss had the aspect of Tortula (formerly Pottia) truncata, an uncommon fall ephemeral, which we all believed it to be at the time. Subsequent examination immediately revealed two sporophyte traits ruling out Tortula: (1) a mitrate, not cucullate, calyptra, and; (2) a short-beaked, not rostrate, operculum. This put it into the Funariaceae, where its small size and the peculiarly shallow, wide-mouthed dried capsules “quite unlike the capsule of any other North American species” (Crum and Anderson, 1981) revealed this to be Physcomitrium collenchymatum –the first collection from Ohio! 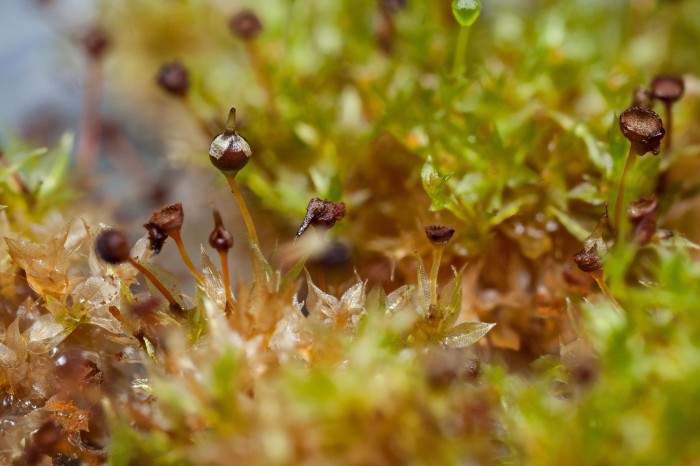 According to Crum and Anderson (1981), P. collenchymatum is “An ephemeral of weedy situations, thriving in disturbed habitats, on mud or damp soil and especially on silt, on the banks of ditches, creeks, rivers, or ponds, and also on bare soil in old fields (corn, cotton, and sugarcane fields, perhaps generally in bottomlands); spores maturing in fall to spring. Rare and scattered over much of eastern North America.” Yippee!