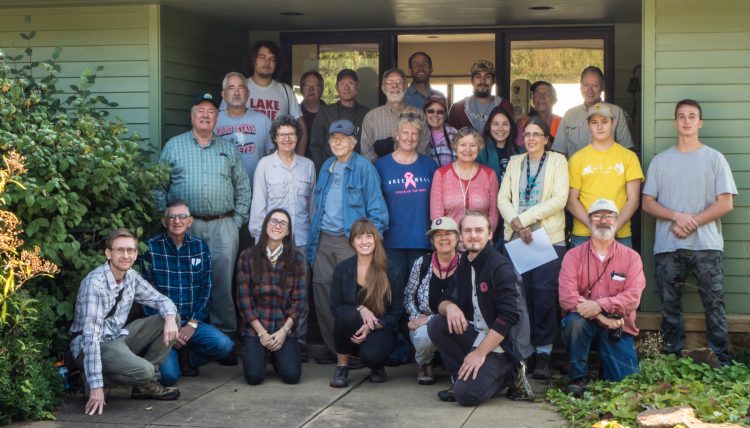 History.   In terms of cryptogams, Hocking County is the best collected county in Ohio.  Of the approximately 420 Ohio moss species, 244 have been collected in Hocking County.  One of the most diverse areas in Hocking County is the Crane Hollow Preserve.  Snider and Se (1990) performed a thorough survey of bryophytes in Crane Hollow.  They found 179 mosses, 45 liverworts, and 3 hornworts.  During further exploration of Crane Hollow Preserve, Barb Andreas and Joe Moosbrugger found Neckera pennata (Andreas & Lucas 2017), and Loeskeobryum brevirostre. 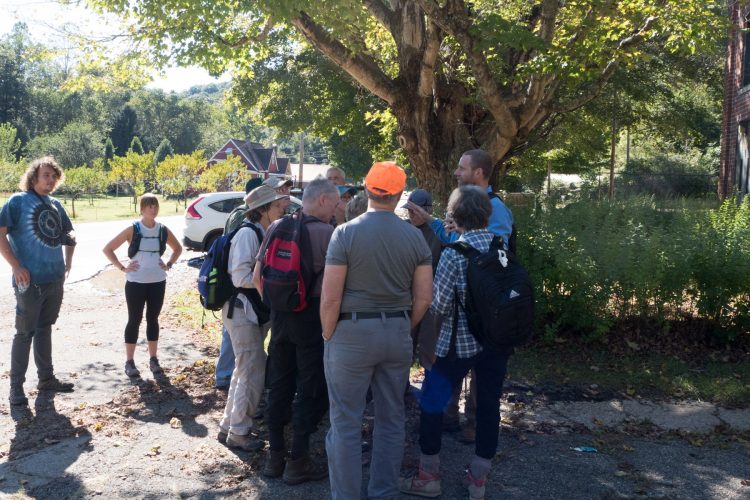 Getting the lay of the land on Friday afternoon.

Hocking County is rich in macrolichens.  Of the approximate 225 species in Ohio, about 120 were reported from Hocking County. Ray Showman (1987) published a list of the macrolichens from Crane Hollow Preserve.  He reported 77 species.  In a follow-up survey, he reported five more species (Showman 1993). 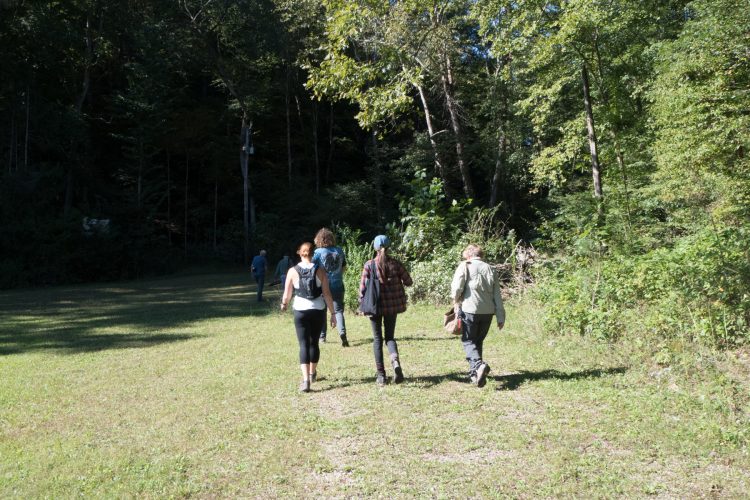 Friday afternoon visit to a non-contiguous and non-dedicated parcel
located to the east of the town of South Bloomingville.

Crane Hollow Preserve is named for the large hollow running from north to south throughout the preserve. The northern third of this valley is comprised of two near-equal sized drainages that form a “Y,” with Crane Hollow to the west and Hood Hollow to the east. 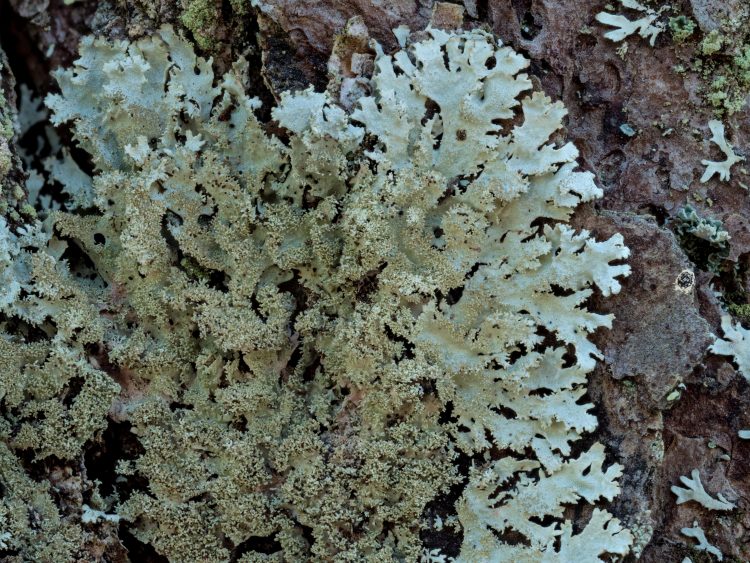 William and Jane Ann Ellis founded Crane Hollow in 1977 with the purchase of 434 acres within the Crane Hollow watershed.  In 1978, they purchased an additional 55 acres, and these properties formed the nucleus of Crane Hollow Preserve. 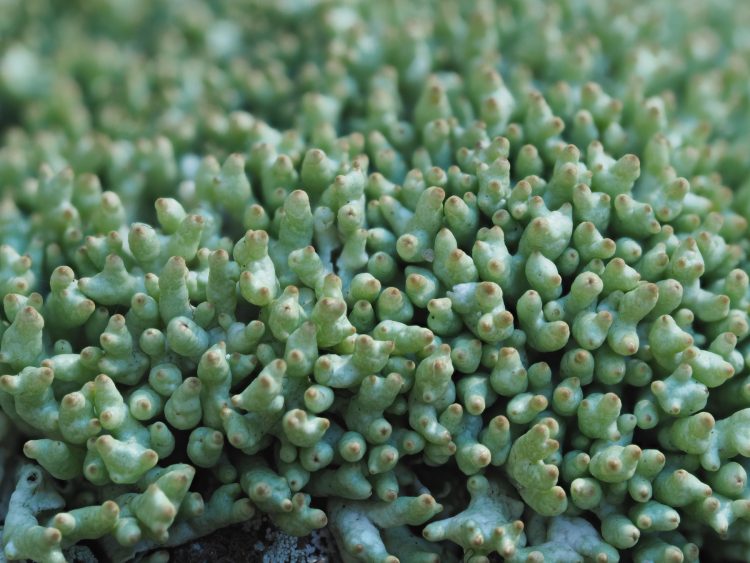 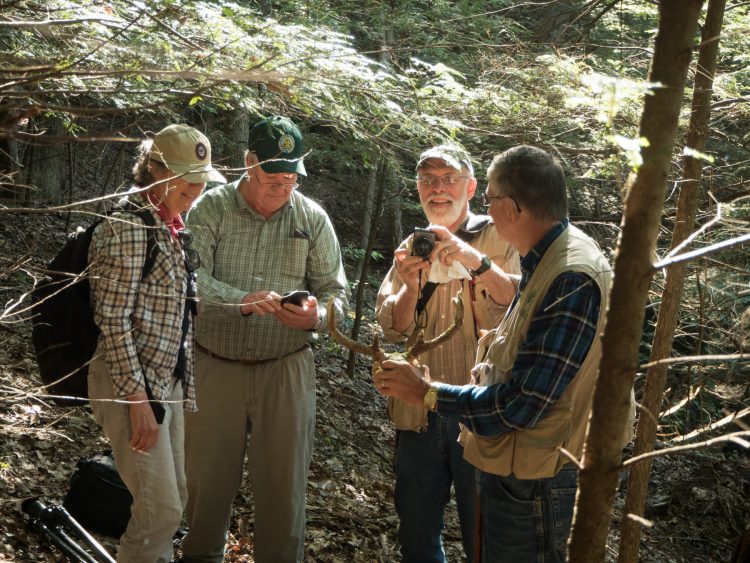 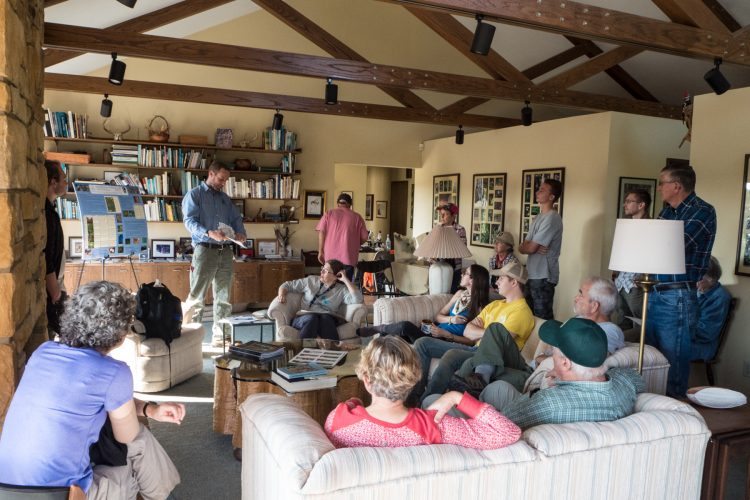 Joe orients the group before heading out to the field.

The purpose of selecting Crane Hollow Preserve for the fall foray was to visit land acquisitions added to the Preserve after the first surveys by Snider, Se and Showman.  Crane Hollow also provided an opportunity for OMLA members to see a high diversity of species. 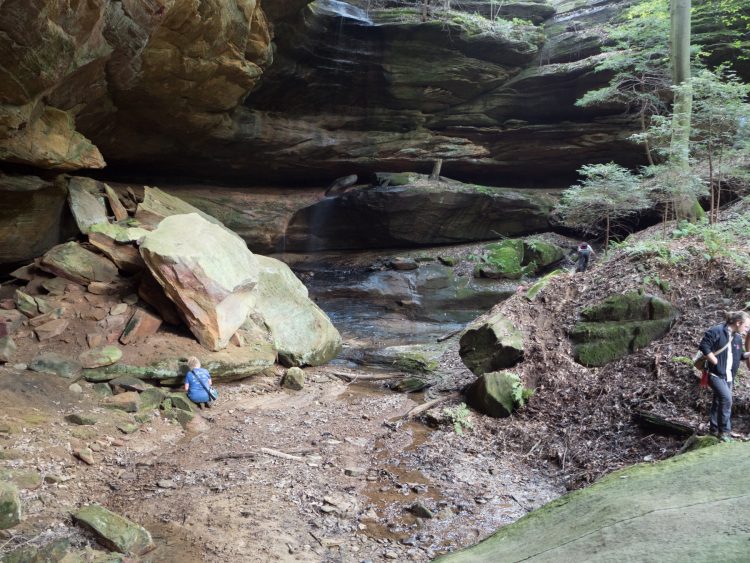 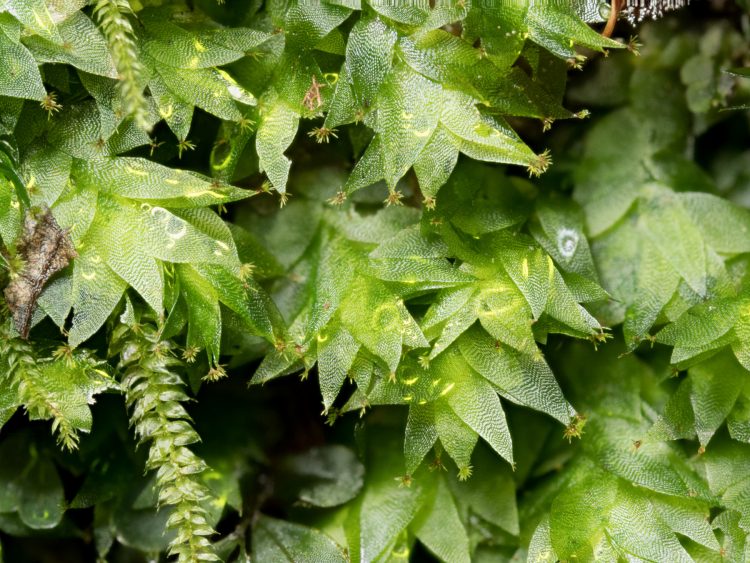 Hookeria acutifolia inhabits recesses in cliffs.
Note the gemmae at the leaf tips. 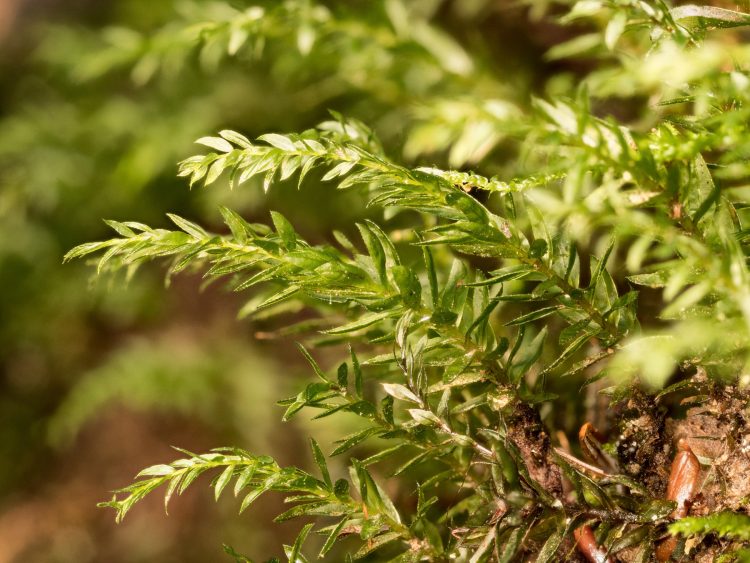 BRYOPHYTE RESULTS.   Results of the bryophytes found during the 2018 fall foray are presented in the table below.  Ninety six moss species, 33 liverwort species, and one hornwort species were collected from the study areas. Diane Lucas found Orthotrichum ohioense near the Crane Hollow Preserve office. 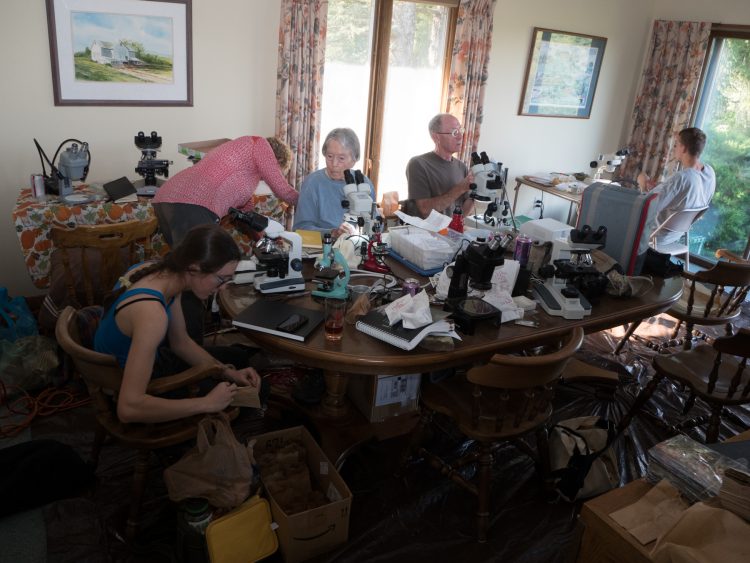 The Saturday night “scope room” is a field laboratory. 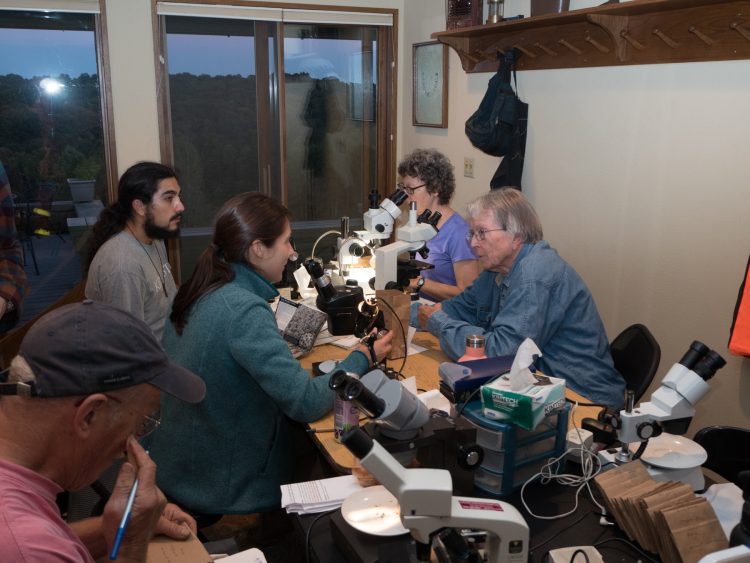 OMLA members learn from each other.

LICHEN RESULTS.  Three locations in the Crane Hollow Preserve were searched for lichens: Early Hollow (including the parking area), Goldmine Hollow and Young Hollow.  In all areas, only the south-facing slopes were visited.  A total of 49 species of macrolichens and 47 crustose species (collected only from Early and Goldmine Hollows) were recorded.  There were also 3 species of nonlichenized allied fungi identified. 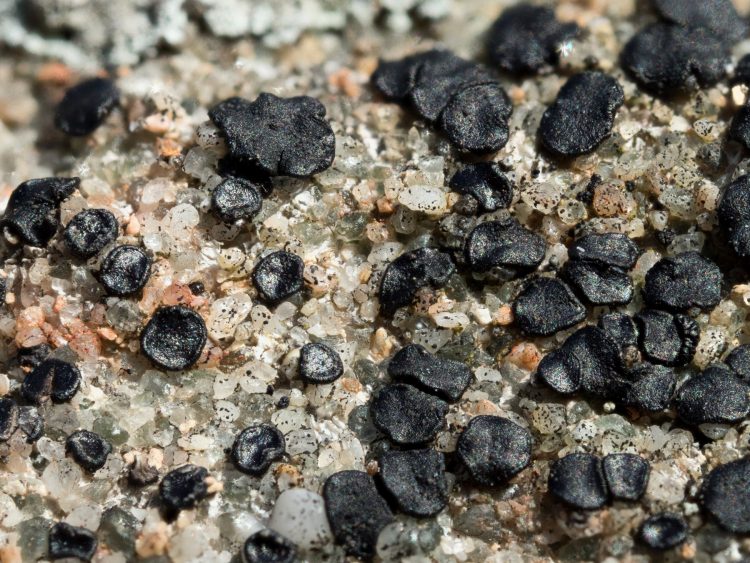 Hocking is one of the most studied counties in Ohio for macrolichens, with 120 species recorded.  Even so, this foray found 4 species which had not been previously reported.  Punctelia  borreri is listed as new because earlier collections were almost certainly misidentified.  Canoparmelia caroliniana is a state-listed species with records from only 5 counties.

There were 8 macrolichens that are reported for the first time in Crane Hollow.  Since crustose lichens have not been studied at Crane Hollow all of the crustose species found during this foray are new for Crane Hollow.

Crustose lichens have not been well studied in Ohio and many of these listed below are probably new for Hocking County.  Several crustose specimens were collected which did not fit the existing keys and may either be atypical or new to science.  These were sent to Dr. James Lendemer at the New York Botanic Garden for his expert opinion.

Snider, J.A. and S. He. 1990.  A Catalogue of the Bryophytes of Crane Hollow Nature Preserve, Hocking County, OH. Unpublished Report.106p.