In partnership with the West Virginia Native Plant Society, the Ohio Moss and Lichen Association (OMLA) visited an area of the Wayne National Forest in Gallia County that is especially rich in lichens and mosses. This area is under consideration for designation as a protected lichen and moss study area. 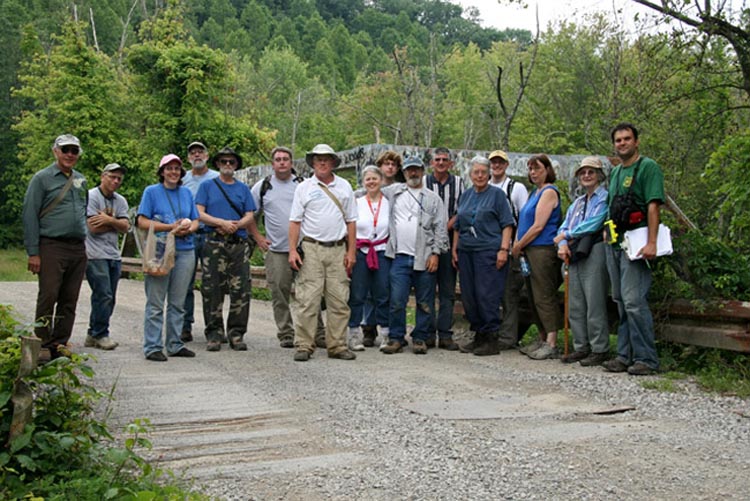 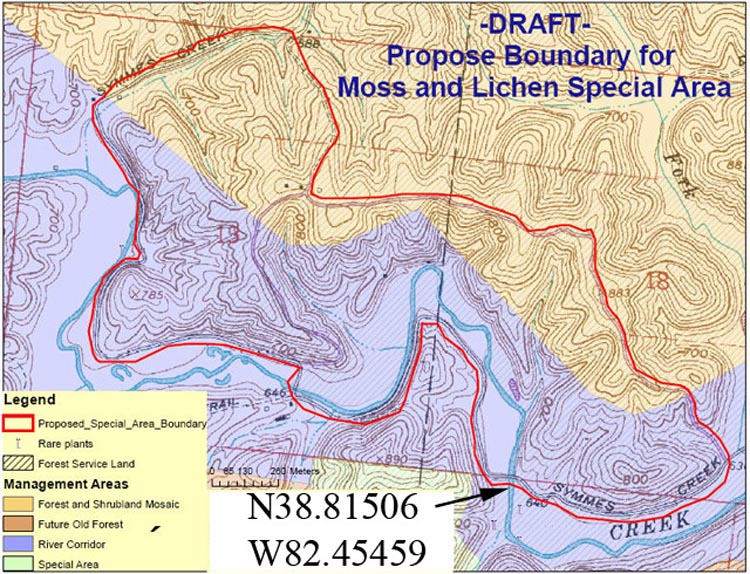 The arrow and geographic coordinates show where we parked and walked in along the Creek. We scaled some bluffs in the woods. There is some steep relief, a sandstone bluff, where mosses and lichens are abundant. 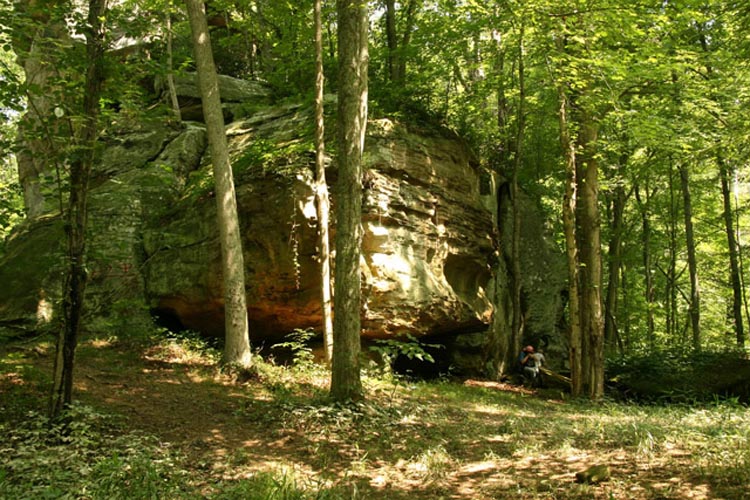 One of the more intriguing mosses growing here is Diphyscium foliosum (family Diphysciaceae), seen on soil at the base of the bluff, in fairly dense shade. Unlike most mosses, which have their spore capsules elevated on a thin stem-like stalk, the capsules of Diphyscium are nearly stalkless, simply sitting practically on the ground surrounded by a few small leaves. According to Howard Crum in Mosses of the Great Lakes Forest, the sloping shape of the tilted capsules causes spores to be expelled in little puffs when the capsules get pelted by raindrops. Evidently the spores can fly two inches in this manner, accounting for the common name “powder puff moss.” Crum also mentions that the great bryologist William Steere has said that Diphyscium looks like “scared rabbits in the grass.” 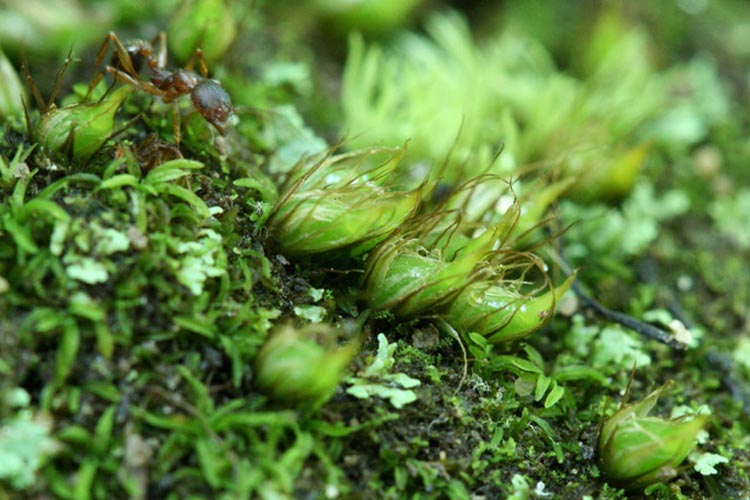 Although this is one of our most distinctive mosses when it is “in fruit” (the useful but very inaccurate term for a moss that is bearing sporophytes), sterile Diphyscium can be tricky to ID. The strap-shaped leaves, sometimes growing quite densely, can mislead you into thinking it’s in the family Pottiaceae. The leaves are distinctly dark, almost blackish, when dry. The woodsy, often acidic, habitat is a good clue.

Growing on the bark of a small slanted dead wood sapling is a lichen Parmotrema hypotropum, the powdered ruffle lichen. 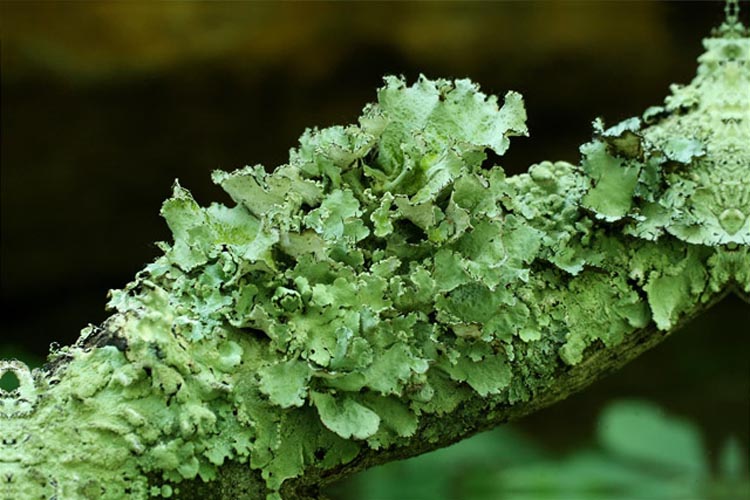 Another distinctive lichen is a “rock tripe,” Umbilicaria mammulata. The rock tripe lichens are large leathery wrinkled discs attached to the tops and sides of rock outcrops and boulders. 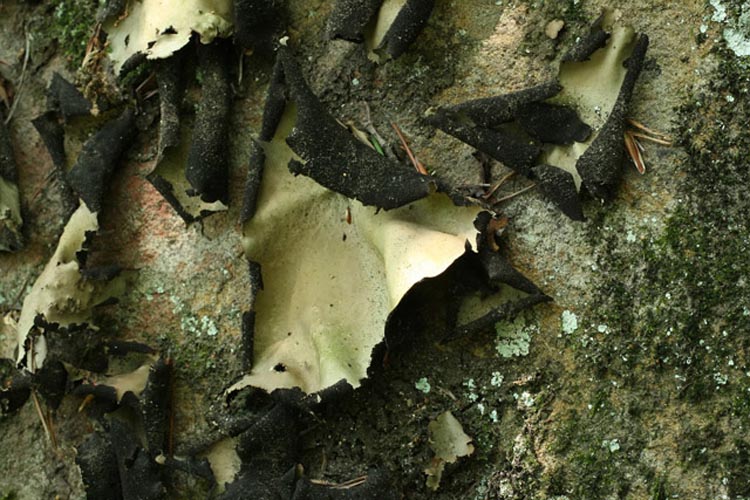 Growing on top of this huge rock tripe-adorned boulder are several mosses and a reindeer lichen. One of the most abundant mosses here is strictly a dry rock-top species, commonly found on granitic or sandstone-based rocks, but not often calcareous ones, Hedwigia ciliata. Hedwigia displays a growth form very similar to the fruticose (shrubby) lichen, Cladina subtenuis against which it is snuggled. This Cladina is an example of a “reindeer ‘moss’,” related to arctic forms that are indeed staples of reindeer and caribou. 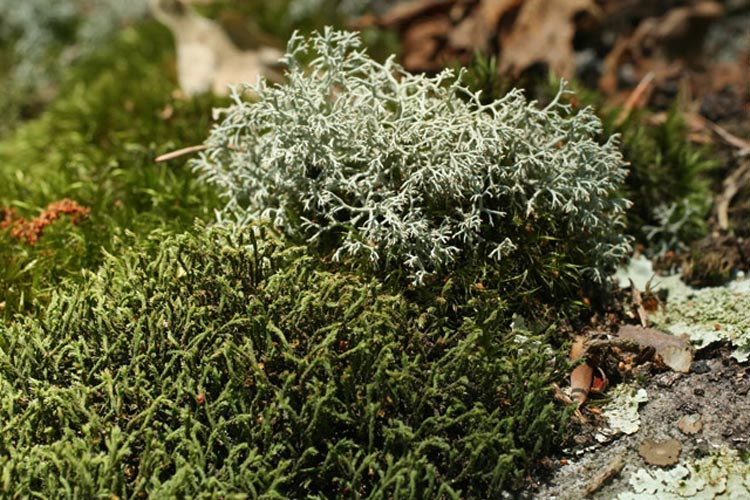 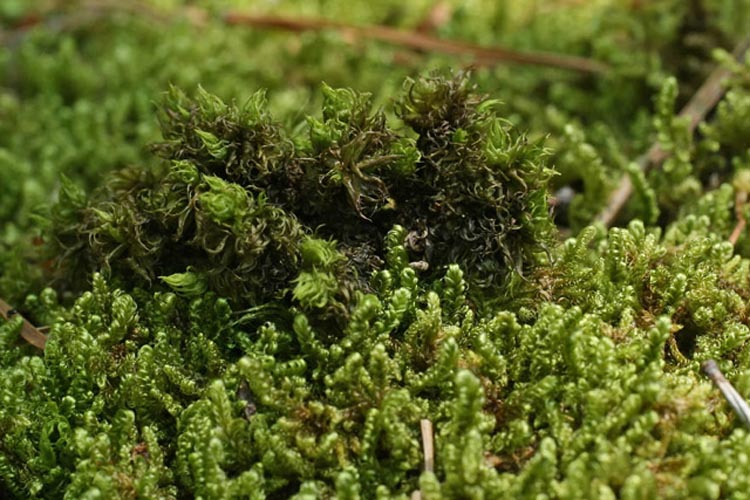 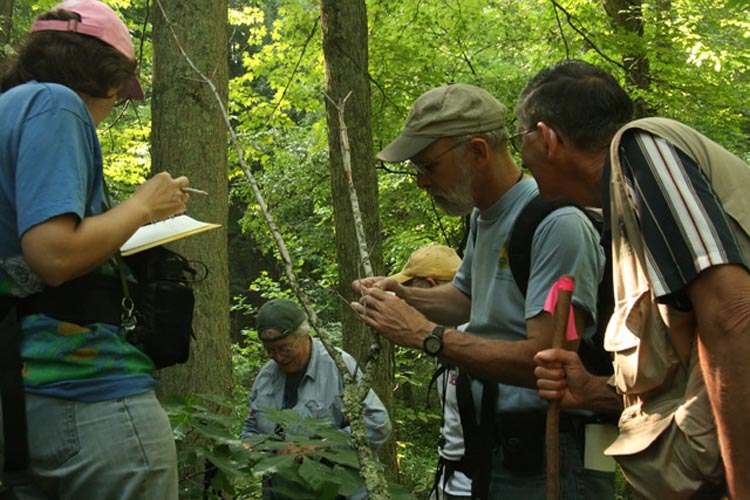 Because this was a one-day foray, we didn’t have an evening lab ID session. Members took specimens home for identification. So far, we have the following mosses confirmed: Steerecleus serrulatus, Hypnum imponens, Haplocladium microphyllum, Bryoandersonia illecebra, Mnium affine var. cilare, Pylaisia intricata, Anomodon attentuatus, Dicranum scoparium, and Atrichium undulatum (in the broad sense, as several forms of Atrichum previously considered varieties of A. undulatum are now recognized as species).

If you were on the foray, please submit your identifications for a more complete list in the next issue of OBELISK.