Trematodon longicolis, a “long-necked moss,” from Hocking County is a new OH record.

During May 2005 Tara Poling and I made yet another bryophyte exploration trip to “Deep Woods,” the privately owned 282 acre tract in Hocking County that is the site of the Ohio Biological Survey-supported “All Taxa Biodiversity Inventory.” Owing to the diversity and beauty of the site, doing a moss survey here is exhilarating. However, because several biologists, most notably Barb Andreas and Jerry Snyder, have already done extensive field work nearby, new county records are especially hard to snag from Hocking, which has 215 moss taxa, more than any other Ohio county. One of the spots we focused on this fine spring morning was just above the bank of the East Fork of Queer Creek, on ground that was disturbed one year previously during the construction of a narrow footbridge across the creek. Conspicuous on the site that day was a very widespread moss typical of eroding woodland trails and such, the smallish linear-leaved acrocarp moss Dicranella heteromalla, seen abundantly “fruiting” (bearings sporophytes) as it so often does. The numerous sporophytes practically formed a “turf” on the recently sidecast mineral soil at this open wooded site. 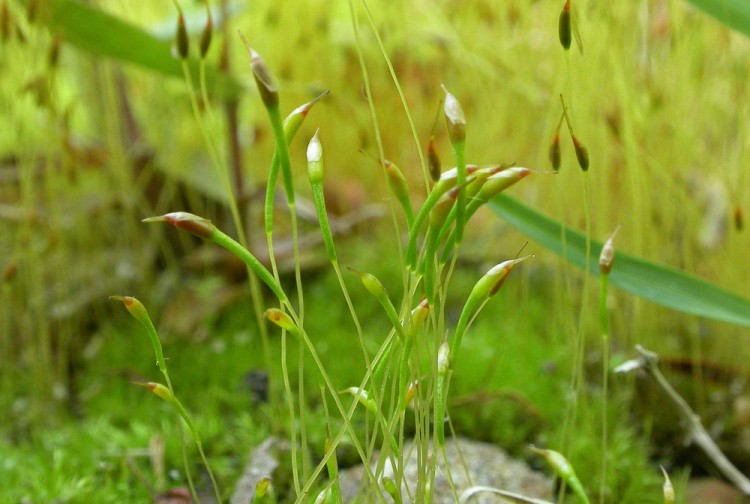 Careful examination of the capsules there in that mossy Dicranella “turf” yielded a striking surprise. Scattered here and there were patches of a superficially similar moss that bore very oddly elongate capsules. It was immediately apparent that this was a “long-necked” moss of the genus Trematodon, subsequently identified as Trematodon longicolis, and noted shortly thereafter to be absent from the Atlas and Checklist of the Mosses of Ohio because it was new for the State! According to Crum and Anderson in their 1981 identification manual Mosses of Eastern North America, this plant is found on damp sand or clay of banks, especially roadside ditches. They describe its range as being very widely distributed, especially in tropical and austral latitudes, but also occurring in eastern North America, from New Jersey and southern Ontario to Florida and west to Oklahoma and Texas (but more common southward). Perusal of the amazing searchable New York Botanical Garden’s “Virtual Herbarium” that includes the nearly 300,000 specimen American Bryophyte Catalogue shows this new record is near the northern limit of its range. One wonders how this moss came to grow along this Ohio stream. Is there a big source population nearby that blankets the region with spores and enabled this rare pioneer plant to spring up so swiftly on a recently created site? Also striking was the occurrence of other uncommon ephemeral associates alongside the long-necked beauty such as Bruchia flexuosa bearing capsules that look like little weather balloons, the diminutive Pleuridium subulatum, with immersed capsules, along with a very common spring ephemeral noted elsewhere at Deep Woods, Physcomitrium pyriforme. The match-up between plant species and particular environmental conditions is endlessly fascinating.