In 2012 Lake Erie Bluffs in Lake County was acquired by Lake Metroparks. This was 592 acres of beach, lake bluffs, wet fields, and forests. A big thanks to my father John Pogacnik who, as a biologist working for Metroparks, helped attain grants to preserve this fantastic tract of land. One of the rarest habitats on the property is the constantly eroding lake bluffs. These bluffs were first known to have the potentially threatened greater fringed gentian (Gentianopsis crinita), the rare Pringle’s aster (Symphyotrichum pilosum var. pringlei), and potentially threatened golden fruited sedge (Carex aurea). I had hiked the property before I had a strong interest in mosses, lichens, or plants in general. 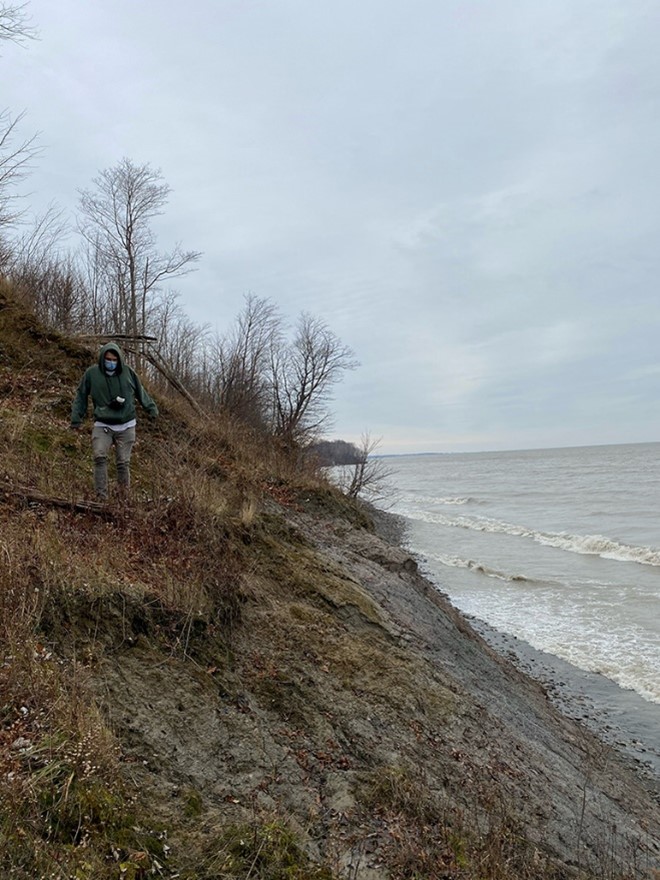 A few years ago, when I first met Tomás Curtis, he notified me of a rare lichen that grows on bare clay of the eroding lake bluffs. The lichen was called Bachman’s jelly lichen (Enchylium bachmanianum). It is listed as endangered in Ohio. I went in search of this lichen and found it in multiple places. This piqued my interest in the lake bluffs. 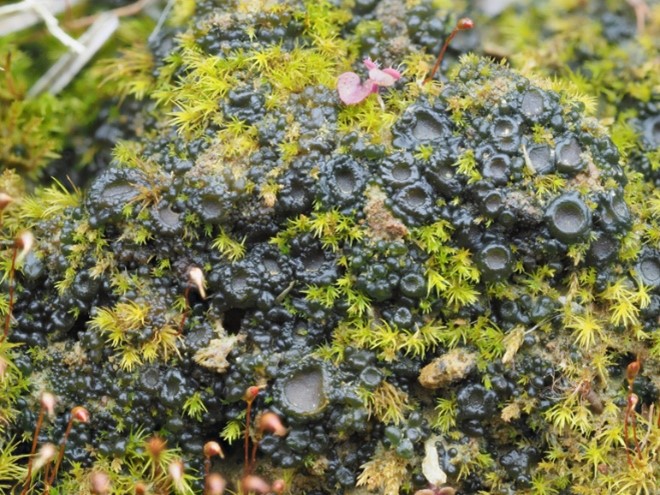 Last year while exploring the lake bluff at the Metropark with my father I found a strange moss which almost resembled algal haircap moss (Pogonatum pensilvanicum), with a persistent protonema and sporophytes with tiny leaves at the base. Something was off about this moss though; it lacked a hairy calyptra and it had a calyptra on one side of the sporophyte. 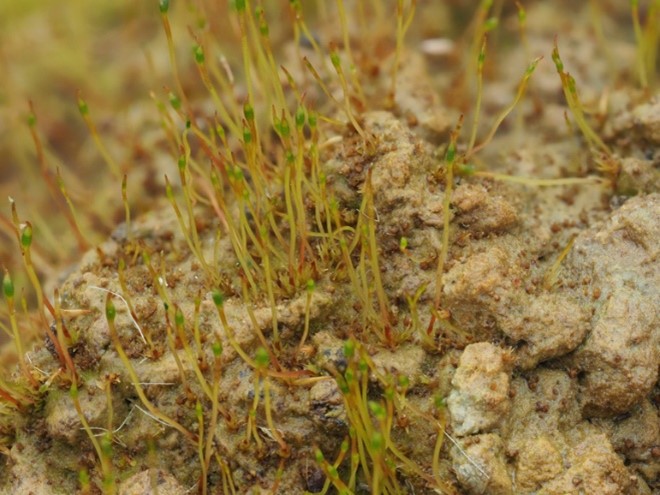 I later found out that this moss was known as naked flag moss (Discelium nudum) a globally rare moss which Natureserve lists as a G3 globally vulnerable species. With further research I found this moss had been in 11 Ohio counties mostly in Northeast Ohio. The Consortium of North American Bryophyte Herbaria shows a handful of Ohio records with the most recent a collection from Diane Lucas in Erie County along the Vermillion River. Any other collections of this moss were before 1950. The few mosses besides Discelium and Pogonatum that have a persistent protonema include the ephemeral “earth mosses” in the genus Ephemerum and goblin’s gold (Schistostega pennata). This moss should be sought after in places with constant eroding clay soils in the months of November to January.

After finding this I had a real interest in these bluffs and had to look for more. A trip into Ashtabula in October this year with John Pogacnik found some similar habitat. We discovered more Discelium nudum, Enchylium bachmanianum, and a new liverwort for me, common kettlewort (Blasia pusilla).

When I saw this liverwort my first thought was Pellia epiphylla, another thallose liverwort, but this had gemmae on the lobe tips. Blasia is unique by having two types of gemmae; the gemmae on the lobe tips and others in flask shaped structures protruding from the thallus. The lobes also have colonies of the blue-green bacterium Nostoc on them. There are very few records for Blasia, i.e., a handful on CNABH and a couple of recent iNaturalist records from Rob Curtis and Chris Poling. After finding it at this site I had to check the original bluffs where I thought I had seen this Pellia lookalike. I saw an observation from Rob Curtis in the general area and sure enough I saw it when I revisited the site. This was a significant find for both sites. This is also true for the Enchylium bachmanianum. Talking to Tomás he told me about how this lichen was very overlooked and is probably in more counties than have been recorded. The jelly lichens (family Collemataceae) are unique by containing cyanobacteria or “blue green algae” rather than the usual true algae. There are between one to two dozen species of this family recorded in Ohio. The Lake Erie Bluff, which is also home to variable forklet moss (Dicranella varia) and lesser smoothcap moss (Atrichum angustatum), will be a good spot to check on the Lake County forays next fall! 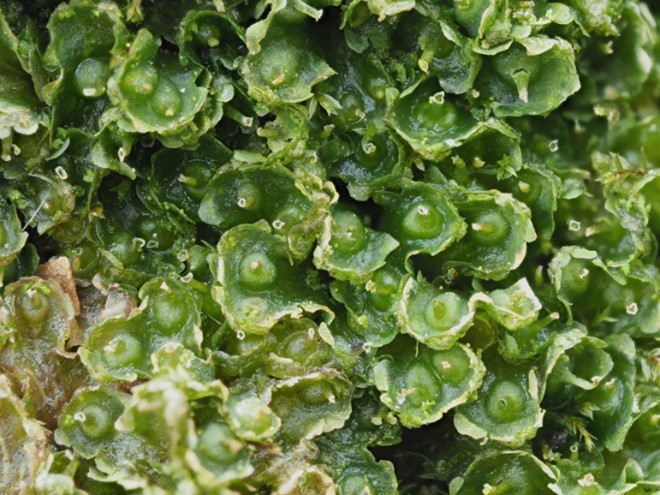 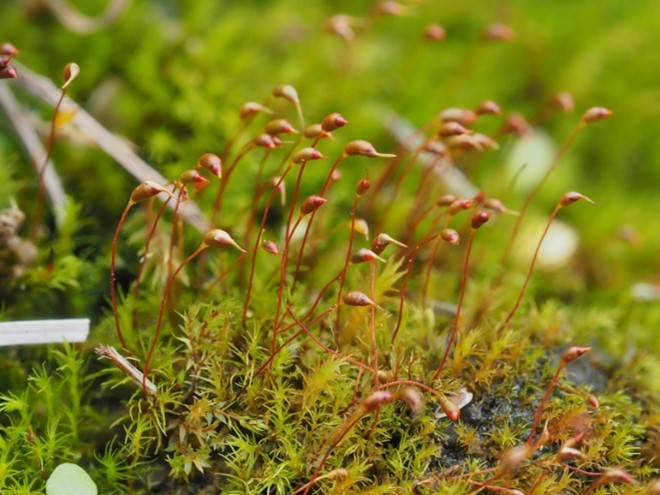 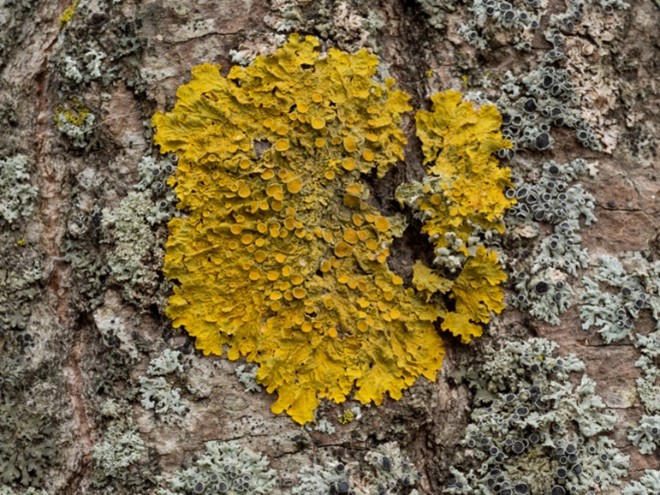 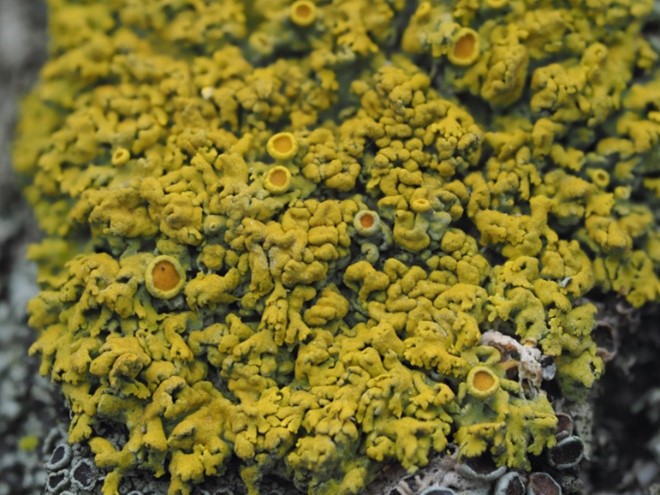 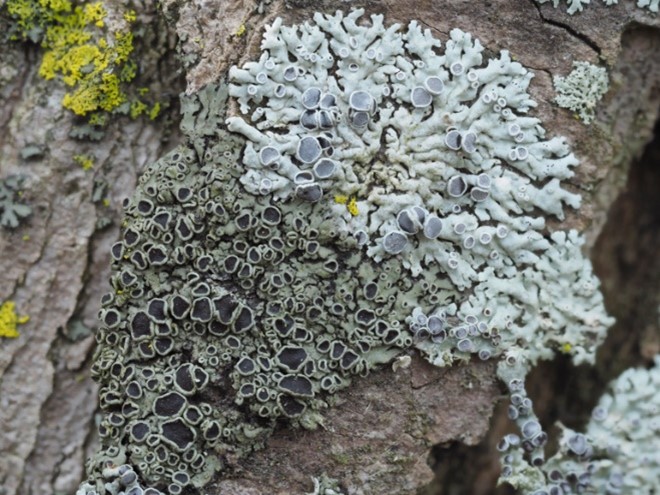 The sunburst lichens are quite easy to ID as there are only a handful. First, they can be split in half by looking for soredia. The species that will have soredia are Xanthomendoza fallax and X. weberi. X. weberi can be easily told by its narrow lobes and lack of rhizines. X. fallax will have lobes with upturned hoods filled with soredia. It is also good to note that apothecia are quite rare on the sorediate sunburst lichens. All sunburst lichens that lack soredia will most often have apothecia. These include Xanthomendoza hasseana, Xanthoria parietina, and Rusavskia elegans. Rusavskia elegans is restricted to calcareous rock such as limestone. This lichen is quite unique as it has almost rounded lobes. Xanthoria parietina will have flat lobes that are wide and can be found on both rock and bark. Xanthomendoza hasseana will have abundant pycnidia and conspicuous rhizines. 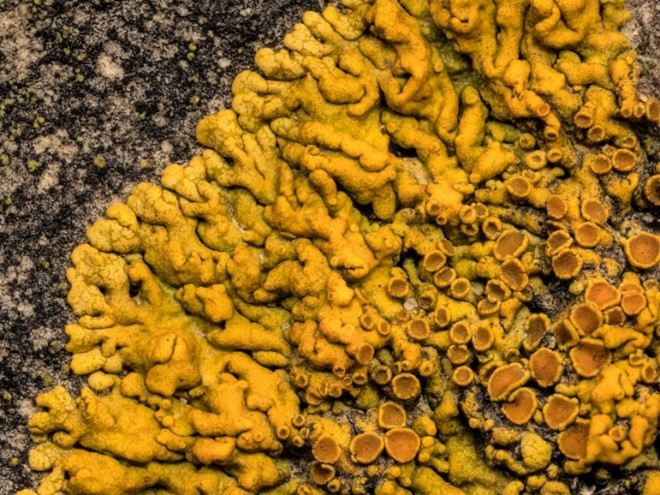 The rosette and shadow lichens at the site are easy identifications as well. The most distinctive one is Physcia adscendens which has hooded lobe tips and ciliate margins. This lichen Is common on the bark of cottonwoods along the lake but becomes more uncommon inland. Bob noted that he usually only sees this lichen growing on gravestones. Physcia millegrana is another easy one which has finely dissected lobes with soredia and occasional apothecia. Physcia stellaris will have narrow light-colored lobes without soredia and apothecia that are almost always present. Phaeophyscia ciliata will look very similar to Physcia stellaris but will have dark green lobes and have cilia along the lobe margins. Lastly Hyperphyscia syncolla grows tight against the bark and almost appears crustose. Thanks to Robert Klips for pictures of these mosses and lichens at these sites.