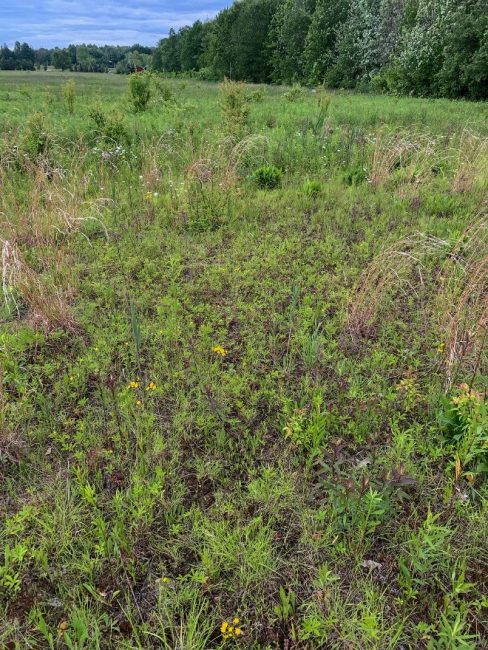 On June 7, I joined about 20 other volunteers for a bioblitz at Hidden Lake, a 111-acre Lake Metroparks property in Leroy Township in northeast Ohio. While some volunteers focused on birds, mammals, plants, butterflies, dragonflies and other insects, I decided to search for lichens. Hidden Lake includes a 9-acre man-made lake, constructed sometime during the period of 1950 to 2000. I hiked a trail around the lake and found several shield and other foliose lichens on the hardwoods that bordered the lake.

Later that morning, I met Lake Metroparks biologist John Pogacnik and his son, Shaun, who were also participating in the bioblitz, at an old field that borders Kniffen Road, east of the lake.  The rectangular field is roughly 150 yards wide (east-west) and 570 yards in length (north-south). John and Shaun led me to an open area in the field, near the parking lot for the lake, where they had found several species of Cladonia lichens during a previous visit. The attached photo shows this open area, looking south.

When the Lake Metroparks acquired the property in September 2006, the field where the lichens are was infested with giant reed (Phragmites australis). In 2008 and 2009, Lake Metroparks staff began to manage the field to get rid of the invasive species. Herbicide was used on the invasive plants for two years and then the field was plowed. Since that time, invasive species continue to be controlled and the field is occasionally brush-hogged, with the last time being over 5 years ago.

Historical aerial photos of the site show that in 1937 and 1951 the entire area that is now meadow was a farm field. In 2000 the area was an open field. When the lake was created, fill was piled on the northwest corner of the lake. It is possible that some of the fill may have been put at the north end of the field where the lichens are growing, due to the amount of shale in parts of the field.

Cladonia is a well-established and speciose genus of lichenized fungi widespread throughout North America. 175 species are known to occur within the continent (Esslinger, 2018), and of these, 38 have been documented in Ohio (Ohio Moss and Lichen Association, 2018). In general, Cladonia species seem to be more abundant in the more forested eastern half of the state. Below is a list, including brief descriptions, of the nine Cladonia species found during the Hidden Lake Bioblitz held on June 7, 2019.

Cladonia cristatella Tuck. In Ohio, this is among a relatively small group of Cladonia species that produce red apothecia atop podetia. C. cristatella can be distinguished from other red-fruited species by noting the corticate, esorediate podetia which contain usnic acid in the cortex. It has been documented throughout the state but seems to be less abundant than historical collections indicate.

Cladonia gracilis subsp. turbinata (Ach.) Ahti. C.gracilis was found for the first time in the state during this Bioblitz by Ian Adams. The subspecies turbinata, can be distinguished from other species that form cupped podetia by the corticate, esorediate podetia, relatively small primary squamules, and lack of substantial proliferations developing from the podetia. It is likely rare throughout the state and possibly restricted to northern counties. 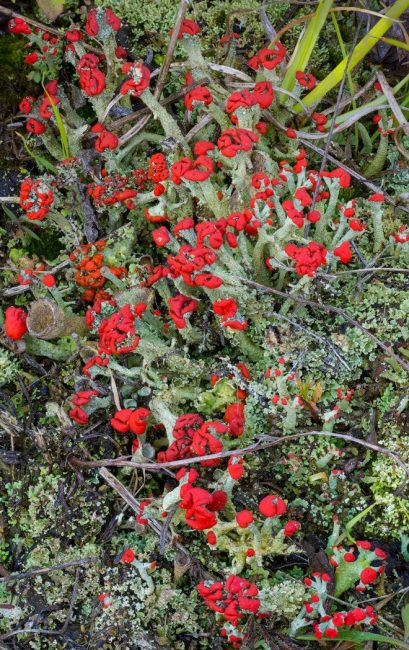 Cladonia ochrochlora Flörke. C. ochrochlora is a common and widespread species in Ohio occurring on various substrates but seems to have been under-reported for centuries. This is likely due to past misidentifications where specimens were labeled as similar species (in particular, C. coniocraea). However, C. ochrochlora can be readily distinguished from other species with pointed podetia and similar chemistry by noting an extended and often patchy corticate region developing above the base of the podetia.

Cladonia peziziformis (With.) J. R. Laundon. This species is common in Ohio on exposed soil (more rarely on bark or wood) and seems to be indicative of early succession of recently disturbed habitat. It is diagnostic from other species with brown apothecia and esorediate podetia by the massive apothecia that over double the width of the podetia they rest upon. It also forms colonies of small, scale like squamules that almost resemble a crust-forming species.

Cladonia polycarpoides Nyl. This species is among a complex that contains various chemotypes that are often lumped into a single species. C. polycarpoides differs from other species/chemotypes known from Ohio by the production of norstictic acid (reacting K+ yellow to red) (Showman and Flenniken, 2004). It is common throughout the state on exposed soil, often in barrens. 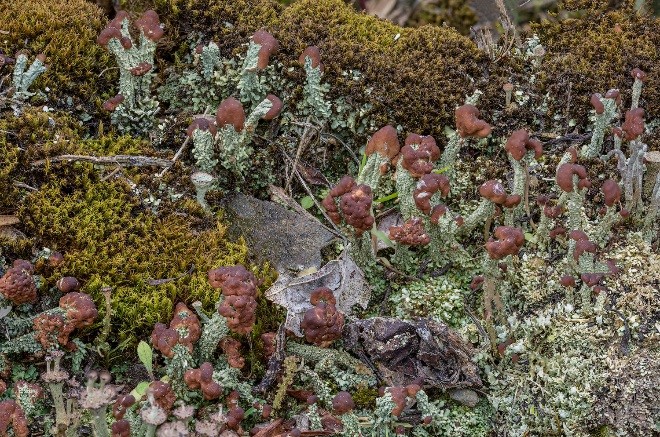 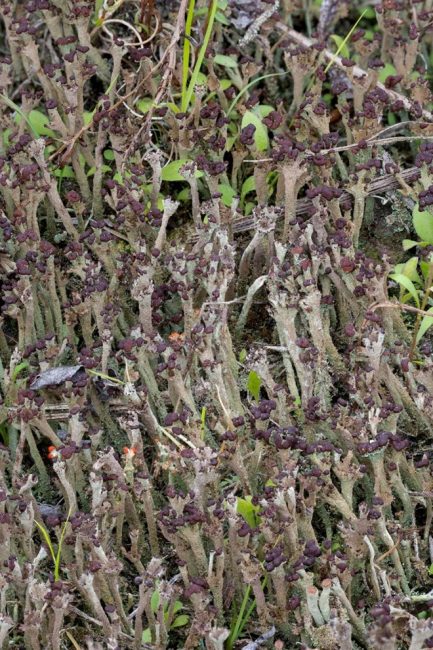 Cladonia pyxidata (L.) Hoffm. C. pyxidata is a stereotypical pixie cup lichen and is relatively common throughout eastern Ohio. It differs from other species with stout, cup-forming podetia by the production of many small, corticate squamules that are plastered to the inside of the cups, and often to the outside. 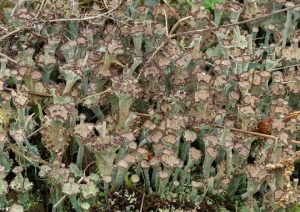 rangiferina (L.) F. H. Wigg. This species is a member of a conspicuous group of branched Cladonia species allocated to the subsection Cladinae that generally lack primary squamules. It is diagnostic from other species from Ohio within this subsection by the production of atranorin and lack of usnic acid (which gives the thallus a grayish color) (Lendemer et al., 2013). This species is common in southeast Ohio, but relatively uncommon elsewhere within the state.

Cladonia rei Schaerer. This species is relatively common throughout Ohio on decaying wood. It is diagnostic from other sorediate species with brown apothecia and that produce fumarprotocetraric acid by the formation of tall podetia with a star-shaped and often semi-cup-forming flare at the tip.

Cladonia verticillata(Hoffm.) Schaerer. C. verticillata is an uncommon species occurring throughout Ohio, though historical collections indicate it was once more abundant. This species can be readily distinguished in the field as it is the only species of Cladonia in Ohio to produce proliferations centrally on the podetia which are often > 4-tiered.

Ohio Moss and Lichen Association. 2018. A List of the Lichens of THE GREAT STATE OF OHIO

Notes on the Photographs: The lichen close-up photos accompanying this article were all taken with a Nikon D7200 camera and a Sigma 150mm APO Macro lens, mounted on a Gitzo tripod used at ground level. Stacked focusing – 6 to10 exposures for each subject – was used, and the separate exposures were merged using Helicon Focus and fine-tuned for tonality and color using Adobe Lightroom Classic CC and Adobe Photoshop CC. I used my body to shade the lichens because the bright sunlight was very contrasty and would have produced blocked shadows and overexposed highlights. I used a calibrated gray card to take reference photos to produce accurate color in the photographs.