The OSU Herbarium:
Fun and Adventure

The Ohio State University Herbarium (OS) has been the source of great fun, even though I didn’t have a chance to visit this year. The fun has been going through images of specimen labels and entering some basic information into the online database for North American lichens, the Consortium of North American Lichen Herbaria  (reachable at lichenportal.org). The OS lichen and bryophyte collections are managed as live data sets on their respective portals (the one for bryophytes is separate but identically configured) and are now searchable by collector name, date, country, state, county, or scientific name. Your search will return the database information plus, in most instances, an image of the label. (Initially entries were made to the database as “skeletal records” consisting of just the label images and scientific names. New records are added directly to the portal, and labels are printed using those data.) I, in addition to other volunteers and OSU student workers, have been transcribing data from the images to online data fields so that they can be electronically searched, compiled and filtered by visitors worldwide. Also, we can go on armchair field trips following in the footsteps of Ohio’s great lichenologists.

In 1891, William A. Kellerman became the first Professor of Botany at OSU, and the same year founded the herbarium. In Ohio, Kellerman collected lichens primarily in Adams, Fairfield, Morgan and Vinton counties. One of his interesting collections is this “Sticta pulmonaria,” now known as Lobaria pulmonaria, with the common name “lungwort.” 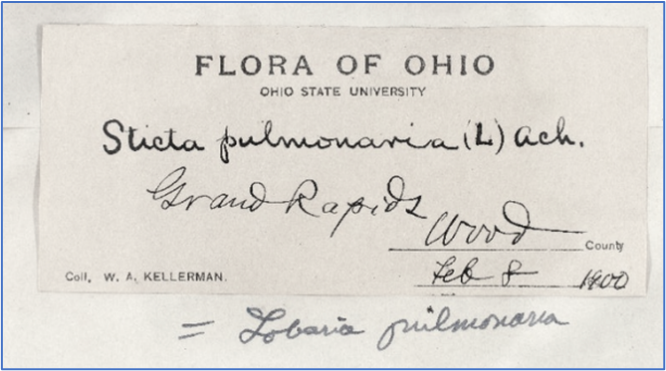 Click the image to see this record on the lichen portal (CNALH).

This is Kellerman’s only collection from Wood County. The species is now presumed extirpated from Ohio. We can imagine 100 years from now, when the pristine air of northwest Ohio once again harbors Lobaria pulmonaria.

On a trip to Allen County in 1892, Kellerman collected another Sticta that until recently was known as a Lobaria, now a great rarity in our state, Ricasolia quercizans. 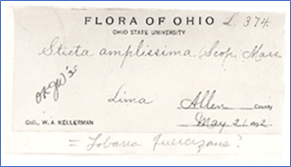 Kellerman collected only two other species from northwest Ohio: Physcia millegrana near Green Springs in Sandusky County and Peltigera canina at Fostoria in Seneca County.

The Bruce Fink collection at the OSU Herbarium consists of 395 specimens, including 186 from Ohio, 109 from Iowa, and 52 from Minnesota. The Ohio specimens are primarily from Adams, Butler, Highland and Preble counties, as well as Fayette, Ross and Warren. Butler and Preble are close to Miami University, where Dr. Fink was Professor of Botany from 1906 to 1927. These include another sample of lungwort, a still-common rock-dwelling crust now known as Scoliciosporum umbrinum, and a jelly lichen, Collema tenax.

throughout Ohio. These include the odd filamentous dwarf fruticose lichen known as “rock hair” (Racodium rupestre) and an Iceland lichen (Cetraria arenaria) in 1962 from a Lorain County site that was subsequently destroyed. The species was presumed extirpated from Ohio until 2018, whn it was discovered at Thompson Ledges in Geagua County.

One of Don’s early finds was the Oxford orange lichen (Rufoplaca oxfordensis). It is known from scattered localities in northeastern North America and western Europe. Don collected Catillaria nigroclavata during the OMLA summer foray to Henry County in 2010.

Ray Showman, co-author of The Macrolichens of Ohio and the editor of OBELISK has contributed nearly 800 specimens from all parts of Ohio, as well as West Virginia, Indiana and Kentucky. His collections include many jelly lichens, such as the skin lichen (Leptogium corticola), which has been found in North and Central America, the Medeira and Azores archipelagos, and southern Europe. I’ve been curious about jelly lichens for the last few years. This year I finally found my very first one in the field during the OMLA fall foray to Noble County.

Of particular interest is Showman’s Hypotrachyna Lichen (Hypotrachyna showmanii), which occurs in the Appalachian Mountains. Ray introduced me to this species on a ridge top in the Edge of Appalachia Preserve. It’s always rewarding to be out in the field with experts.

The next best thing to visiting the herbarium in person is to enjoy it online. Happy searching!