As Christmas approaches, it seems appropriate to include a few notes on the Christmas Lichen, Cryptothecia rubrocincta, a striking crustose lichen that is widely distributed in the southeastern United States as well as tropical and subtropical areas of the West Indies, Central America, and South America. The Christmas Lichen has also been found in a few African mountain ranges. The specific epithet rubrocincta means “red” and “girdled/encircled,” an apt description of the red and green concentric rings of the lichen’s thallus, which are reminiscent of a Christmas wreath. The Christmas Lichen was first described by the German naturalist Christian Gottfried Ehrenberg in 1820. 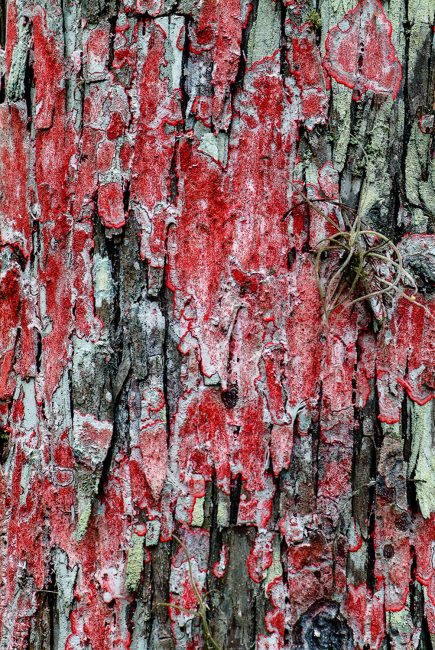 The Christmas Lichen does not produce sexual structures (e.g., apothecia) and reproduction takes place via fragmentation of the bright red isidia that proliferate from the center of the thallus. The red pigment is chiodectoric acid, which produces a PD+ deep reddish-purple spot test, K+ very dark purple-red, KC- and C-. However, chemical spot tests are unnecessary since no other lichen exhibits the flashy red and green coloration of the Christmas Lichen.

While working on my landscape photography book, The Floridas, which was published by Browntrout Publishers in 2005, I traveled extensively in the Sunshine State, and observed Christmas Lichen on cypress, oak, and Sabal palm tree bark in swamp forests throughout the state. There are many displays of Christmas Lichen along the 0.4-mile boardwalk in the 400-acre swamp forest which borders Lee Road, about 10 miles west of Boynton Beach, near the headquarters of the vast Loxahatchee National Wildlife Refuge in western Palm Beach County. This is where I took the two attached photographs. 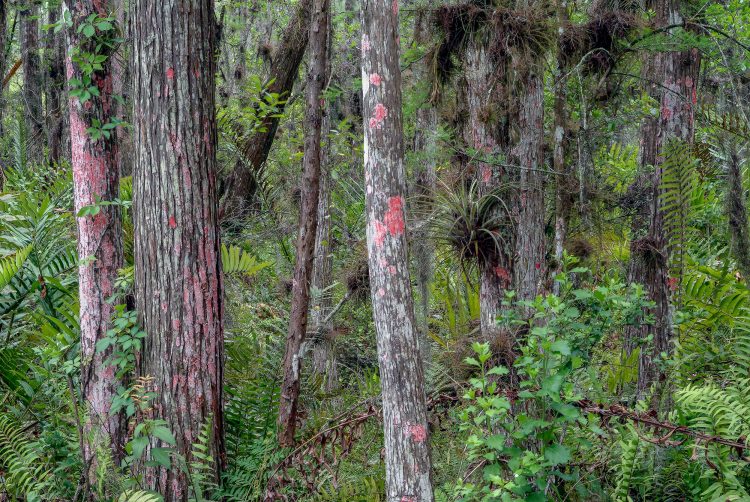 Snow is a very rare occurrence in Florida, but the Christmas Lichen proudly displays its Yuletide colors every month of the year in the Sunshine State.