When bryological sleuth Rebekah Smucker shows up in Ohio, one can be sure that she will find something interesting and small. This year, after the 2019 OMLA workshop to Ashtabula County, Becky stopped by Hocking County on her way home to North Carolina. Although she had a 7-hour drive ahead of her, she wanted to look for a moss that she and Dr. Paul Davison (University of North Alabama) are researching. That moss is Fissidens closteri, and to quote Becky “if you can see leaves, it’s not F. closteri.” The plants are minute and stemless. The setae are 1.2 mm long, and the capsules are 0.2 – 0.3 mm long (Crum and Anderson 1982).

After Becky described potential habitats, we began to search a few places around Hocking County. On sandstone pebbles in an abandoned lane, and again on moist sandstone rocks that had flaked off a small temporary waterfall, Becky found it. She taught me how to look for it: hold the small rock up to the light and look for sporophytes. With her help, I found it and a specimen is now housed in the Kent State University Herbarium (Andreas and Smucker 19738 KE). 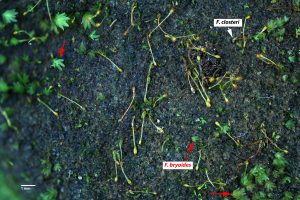 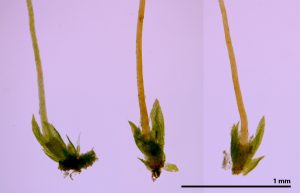 [Editor’s note: an excellent description of Fissidens closteri that was the also source of the 2 images presented above and which appeared in the original OBELISK article can be seen here (hyperlink): www.southernappalachianbryophytes.org]

Through conversations with Becky at the Ashtabula County foray, OMLA member and photographer Bob Klips became curious about an odd little unidentified Fissidens sample gathered in 2005 from a creek in Hocking County, so he mailed it to her a few days afterwards for identification and it indeed turned out to be F. closteri.

OMLA members should search for Fissidens closteri in other Ohio counties. Since the publication of A Catalog and Atlas of the Mosses of Ohio (Snider and Andreas 1996), 18 species have been added to the list of Ohio mosses. OMLA thanks Becky and Bob for their contributions.

Snider, J.A., and B.K. Andreas. 1996. A Catalog and Atlas of the Mosses of Ohio. Columbus, OH: Ohio Biological Survey.