Report of New Macrolichens for the State of Ohio

During the late months of 2017 through 2018 many noteworthy lichen records were found in Ohio. Macrolichens continued to be collected and identified as part of an ongoing study of Ohio lichens by the author. Here each macrolichen species new for the state of Ohio will be discussed individually. These new species include Heppia adglutinata, Hypotrachyna revoluta, Melanelixia glabratula, Multiclavula corynoides, Tuckermanopsis sepincola, Usnea glabrata and Usnea subgracilis.

Lichens were found and collected by the author at various sites throughout Ohio. Specimens cited below, as well as all the specimens related to this broader study, have been deposited at the Kent State University Herbarium (KE). They were examined using both a Stereomaster dissecting microscope and a Nikon Asphaphot-2 YS2 compound microscope. Standard spot tests were performed as well as thin-layer chromatography to study the metabolic biproducts that lichens often produce. Lichens were identified using Lendemer, J., Harris, R., and Tripp, E. (2013), Hinds, J. and Hinds, P. (2007), and Brodo, I. (2016).

Heppia adglutinata is a small terricolous cyanolichen in the family Heppiaceae. It has an olive to brown squamulose to peltate thallus and large red-brown immersed apothecia that generally develop singly in the center of a squamule. Its distribution includes most of the United States, from around the Great lakes and Northeastern United States to the Southwest. Despite having a broad range, it appears to be infrequent and rarely collected. In February of 2018, a population of Heppia adglutinata was located by the author at Castalia Quarry Metroparks in Erie County, Ohio. It was a robust but isolated population growing on calcareous soil in the open quarry and associated with Placidium squamulosum. 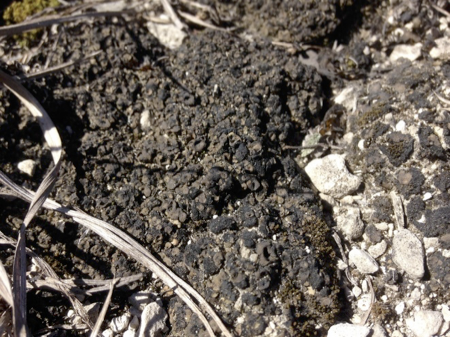 Hypotrachyna revoluta is a medium-sized foliose lichen with loosely adnate lobes that become revolute and produce farinose soredia. The thallus is gray to green-gray and smooth with a faintly maculate to emaculate surface and a black undersurface. In the Eastern United States, this species is infrequent in the extreme northeast, around Lake Superior, and throughout the Southern and Central Appalachians. In January of 2018, a single thallus of Hypotrachyna revoluta was located by the author near Mohican Memorial State Forest in Ashland County, Ohio, near the dam of Pleasant Hill Lake. It was growing on a branch of Acer rubrum in a developed area near a parking lot. Almost a month later, a second thallus was found in an adjacent county at the Simco Wildlife Area. These Ohio locations are quite disjunct from other known records. 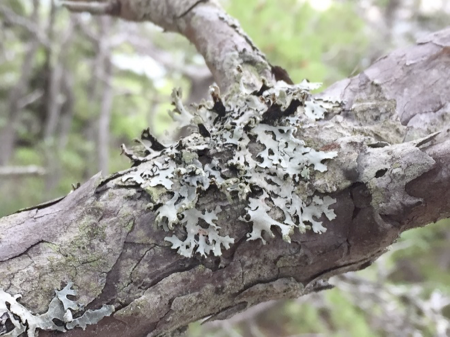 Melanelixia glabratula is an olive-brown to reddish-brown medium-sized foliose lichen with an adnate, pseudocyphellate thallus that produces relatively long, branched isidia. It is common throughout the Appalachians and the Pacific Northwest but also occurs scattered around the Great Lakes. In June of 2018, it was located by the author during the 2018 OMLA Summer Foray in Wayne County, Ohio near Kister Fen. It was found growing on an old sun-exposed wooden fence in a yard and associated with other uncommon and often lignicolous species such as Calicium tigillare and Caloplaca microphyllina. 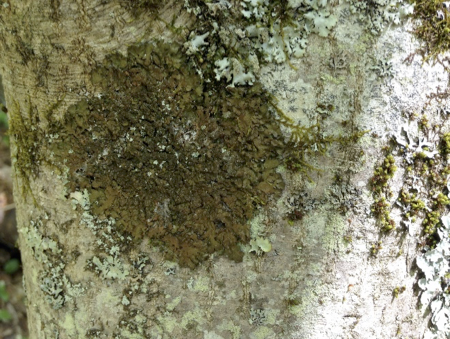 Multiclavula corynoides is one of a small number of lichenized basidiomycete fungi that derive nutrients from green algae that have been incorporated into their tissue. The colonies grow on algal films over moist exposed soil, and the fruiting structures are erect, orange to pale orange-buff clubs that are often scattered within the algal film. It is represented by only two collections in the Eastern United States and is probably rare throughout its range, though collection bias may contribute towards this lack of representation. In June of 2018, Multiclavula corynoides was found by the author at Shaw Woods in Portage County, Ohio. It was growing in a large open power-line right-of-way over moist algae-covered soil and associated with species of Dichanthelium, Danthonia, Rubus, and moss. 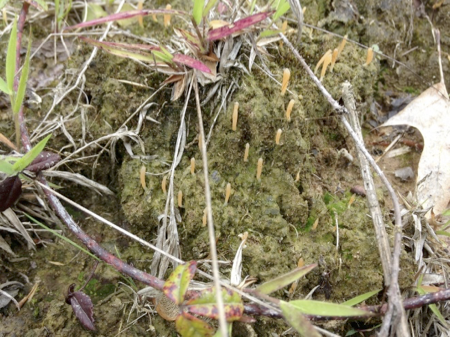 Tuckermanopsis sepincola is a small olive-brown to ashy-brown foliose lichen with raised lobes that often produce apothecia on the tip of the upper surface. The apothecia often become so abundant that the thallus is obscured beneath them. It is common north of the Great Lakes and through the Appalachians on branches and twigs of acidic shrubs and trees in open areas. In August of 2017, a single thallus of Tuckermanopsis sepincola was located at Towner’s Woods in Portage County, Ohio. It was growing on a twig of Chamaedaphne calyculata in a small Chamaedaphne bog surrounded by forest. 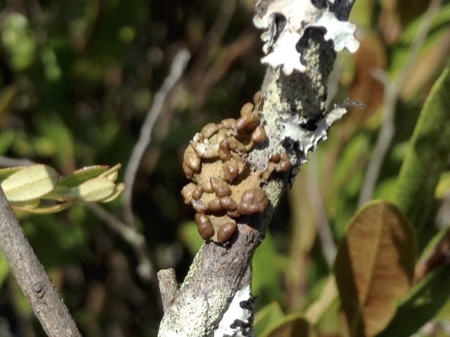 Usnea glabrata is a small, shrubby, fruticose lichen with inflated branches that narrow at the base. The terminal branches usually produce large and often excavate soralia that lack isidiomorphs. These physical characteristics, combined with the production of protocetraric and fumarprotocetraric acid in the medulla, are diagnostic for this species. Known primarily from the West Coast, Usnea glabrata is known from Eastern/Central North America only by a handful of records from the Southern Appalachians and from above Lake Superior.
In December of 2017, a single thallus of this species was collected by the author at West Branch State Park in Portage County, Ohio. Fitting the physical description, the author brought the specimen to the 2018 Tuckerman Workshop for thin-layer chromatography to be performed by Dr. James C. Lendemer and the identification confirmed. 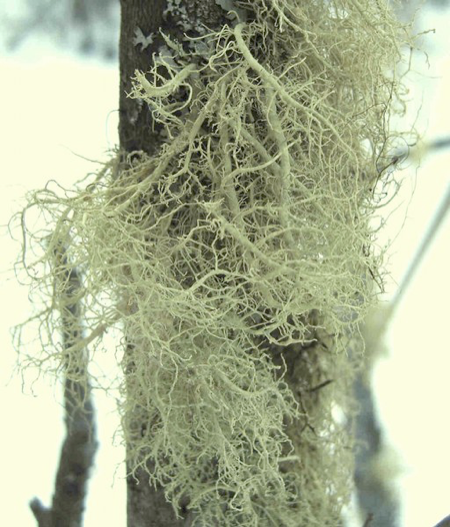 Usnea subgracilis is a light-green pendulous fruticose lichen with thin, smooth branches that produce small soralia towards the end and usually lack papillae and isidiomorphs. In Eastern North America, it is common in the Southern and Central Appalachians and in Nova Scotia, New Brunswick, and New England.

In April of 2018, a single thallus was located at the Grand River Wildlife Area in Trumbull County, Ohio. It was found growing on smooth bark of a young Acer rubrum at the edge of a small wetland. The identification was confirmed by Dr. James C. Lendemer using thin-layer chromatography. 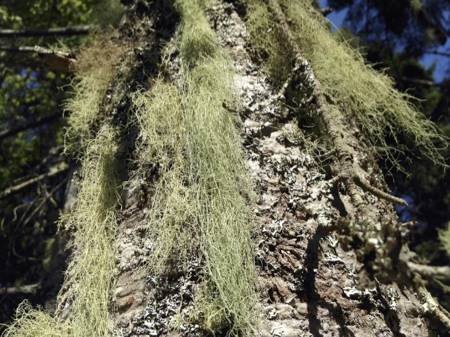 Though the distributions of most lichen species are fairly well known, lichens never cease to surprise scientists with the disjunct records that are regularly found. Each species presented here represents a single record or a small cluster of records amid vast gaps in their range. Though not all these new records are necessarily surprising, each represents an extension of the range of a lichen. There are certainly other species of lichens waiting to be found throughout Ohio – a testament to the complexity and illusive nature of lichenized fungi.

I would like to give special thanks to Dr. James Lendemer, Ray Showman, Dr. Barbara Andreas, and any others who helped mentor me through my studies.

Ohio Moss and Lichen Association 2018. A List of the Lichens of THE GREAT STATE OF OHIO

Showman, R. E. and Flenniken, D. 2008. UPDATES AND CORRECTIONS to The Macrolichens of Ohio. Ohio Moss and Lichen Association.