We sit in the shade of trees
We did not plant. –Peter Raible

Nearly 35 years ago, Ray Showman did a sampling of lichens from several southern Ohio counties. He included the crustose species, hoping eventually to become familiar with them while concentrating on the macrolichens. Unfortunately, this never happened and the specimens were deposited, without names, in the Herbarium of the Museum of Biological Diversity (OSU).

During 2011, I had occasion to examine several of the “unknowns” from the Herbarium; among those collected by Showman. One sample collected was a small piece of bark (white oak) on which Lecanora hybocarpa was found; a fairly common crustose species with orange to brown apothecia over a light-colored stain-like thallus. As often happens, the substrate (bark in this case) may provide room for additional species, incidental to the main one collected and unnoticed at the time of collection. Such was the situation with the Lecanora hybocarpa. Also found was a small area, about 0.5 cm square on which was found a rather distinctive, white, Script Lichen in the family Graphidaceae.

One of our most common Script Lichens is Graphis scripta, looking much like black pencil marks over a thin, pale stain, usually on smooth bark. However, the one just discovered lacked the black carbonized margins on the linear apothecia (the pencil marks) and appeared nearly white, with a pale yellowish cast. It lacked all traces of “black.” There are species of pale Graphidaceae found in the tropics and subtropics and into Florida. However, Ohio is far out of range for any of these. 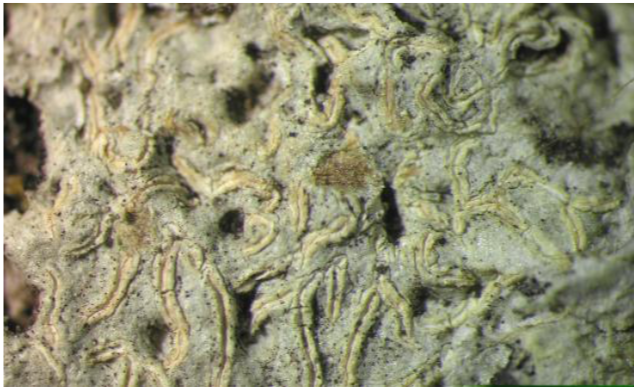 As yet unnamed white script lichen

Recognizing that this was, indeed, a rare find here in Ohio, the specimen was sent to Dr. Robert Lucking, Collections Manager and Curator, The Field Museum, Chicago for his review. Lucking replied, in part, “…this specimen is interesting… [and] …might be a new thing.” He further suggested that it be sent to James Lendemer, New York Botanical Garden, who was doing some recent work with the Graphidaceae. Subsequent contact with Lendemer is best summarized by him on 17 March 2012; “The species does not appear to be anything I’ve seen before. Robert [Lucking] and I both agree that the specimen is too small to formally describe and that further investigation is needed.”